Babaji was in one sense Guru Nanak Dev ji’s first disciple, learning meditation and spiritual truths at his holy feet. 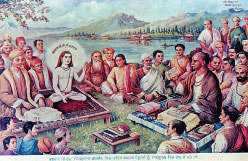 Defeating the Pandit in debate in Srinagar

To compliment his spiritual education, Guru Nanak sent Babaji to Srinagar to study in the school of Pandit Parshotam Das Kaul. While his classmates complained that he never did his homework, he always was first in his class. He was such a good student that he was able to defeat the famous Som Nath Tripathi, in Shastra debate. Baba Siri Chand ji stayed in Srinagar for 2 1/2 years during his youth.