Press Conference: “A Lotus on the Water” 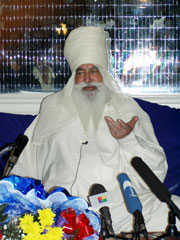 Moscow, 18 May, 2004: “I am like a lotus flower on water—I have not come to disturb the water,” said His Holiness Baba Virsa Singh during a press conference in Moscow. “But my firm faith is that God is One.” The revered Indian spiritual leader of Gobind Sadan, whose centre is in New Delhi, is currently visiting the Moscow area on the invitation of the International Association for Peace through Culture. He was met at the airport by a large crowd who offered the traditional Russian greeting with flowers, salt and bread, and entertained Babaji with joyous singing and dancing. Since his arrival he has given deep consideration to the problems facing Russia, and also reflecting on its very great spiritual future, as he sees in his vision.

In the first week of his visit he has already met with many influential people who can help shape the country’s future, including scientists, political leaders, media personalities, and top businesspeople. He held a press conference at the prestigious Dom Journalista – Russia’s national press club – attended by over 30 journalists- and has to date received coverage on 4 TV stations, 2 radio stations, and several newspapers. The 1st Channel, one of Moscow’s leading stations, has already taken footage for a major documentary and plans to visit Gobind Sadan to complete its coverage. Babaji has spoken to 3 gatherings of over 250 people organized at the beautiful country retreat where he and his entourage are staying. Two of Russia’s leading music icons, Boris Grebentshikov and Andrei Makerevich, have both spoken at his functions with Makerevich figuring prominently at the press conference and Grebentshikov speaking at the gathering on meditation. The Academy of Russian Letters, originally established by Catherine the Great, presented Babaji with their Pushkin Award for furthering cultural understanding, an honour bestowed on the likes of President Putin and the Patriarch of the Russian Orthodox Church. Natalia Gundareva, beloved diva of Russian screen who has been paralyzed for the last two years, came in her wheelchair to seek Babaji’s divine intervention.

Babaji has accepted the invitation of Yuriy Luzhkov, the Mayor of Moscow, to visit him at his residence and he will also be hosted in the Duma (Russian parliament) where he will address a group of representatives. A dialogue with Russia’s top scientists and religious leaders is planned for the weekend.

At the press conference, the Moscow President of Peace through Culture, Yuriy Ageshin introduced Babaji, “When Babaji visited Russia in 1989, he said in an interview, ‘If the course of reforms remains the way it is, then everything will fall apart,’ and he had told when it would happen. But our officials said that the Soviet Union was as strong as ever. Babaji said he would come to Russia again, but only when Russia had recognized its true mission. That means that is now time for massive changes.”

What changes are in store for Russia? Baba Virsa Singh, the noted visionary and highly respected teacher who has been consulted by India’s Prime Ministers for decades, says he has seen since childhood that Russia would some day become the most spiritual country in the world. It will regain its economic prowess based on its vast mineral resources. But to realize their high spiritual destiny, he says that Russians must control their minds through meditation. “Our thoughts are out of control. I can tell you that until you control your thoughts there will never be peace in any country. From childhood onward, keep your mind busy with God and your body busy with work. Then the war in the world will stop and peace will come.”

Speaking to a reporter from America’s National Public Radio, Baba Virsa Singh explained, “These people are not atheists. They have lived under pressure. Russians have been locked up for taking God’s name. Now they are all free to say that God exists, and they are celebrating.”

Rather than preaching conversion to a different religion or setting himself up as a Guru, Baba Virsa Singh is telling overflow audiences in Russia, “I have not come to become your Master. I’m a human being just like you. I respect all the religions of the world. It has never occurred to me to ask anyone to change their religion. My mission is to encourage people to follow their own ways of truth and follow the teachings of their prophet. I am the son of a farmer and have worked hard since childhood. Whatever I have earned through my work, I have shared with those in need, and whatever I have accomplished is due to God’s blessings.”

Encouraging people to find spirituality within themselves and to transcend religious boundaries, Babaji has said to his Russian audiences, “We all go to religious places, but why don’t the virtues of religion come within us? Those buildings are made of stone. But there is also a holy place within us. Let us clean that place and the Light and Love will come within us. God laughs at us when we think we can keep him in a building.”

Speaking very firmly, Babaji advised that Satan has the country in his grip, causing anger and conflicts. “Show love in your homes and tell him, ‘We don’t need your conflict, we don’t need your anger.’ He has been in power too long. Light the lamp of Love and darkness will leave.”

Openly opposing war, Babaji says, “How can we kill anyone? The One we love is sitting within him. How could we kill the One we love? We have no authority to kill anyone. If we don’t have the power to bring someone to life, what gives us the right to kill anyone?” Asked what to do about terrorism, he replied, “We can never say that a terrorist is religious, because terrorism goes against the teachings of every scripture. They are not demons; they are misguided human beings. We should conquer terrorists with love. If you bomb them, they will just become stronger and multiply.” He continued, “A terrorist is one who spreads fear. Spreading fear is terrorism. Look at how many countries are embroiled in war. So many people are dying. And afterwards you (the major powers) say you are destroying terrorism, but who is the greater terrorist? You’re destroying the whole world.” 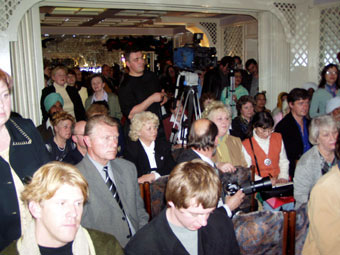 One interviewer noted the number of women present among the men in the gathering and asked Babaji his view on women. “All scriptures teach us to respect women. If religious places ban women that is their own culture – not God’s. God has never thrown down a king or a prophet from heaven. He created a woman to be the path for great souls to enter the world. That’s why I say that a woman has the most respected position in God’s house.”

To the apparent relief of his listeners, Baba Virsa Singh does not insist that they change their diet or their religion. Asked how one can eat meat if one loves animals, Babaji advised, “There is nothing in which there is not life. There are bacteria in milk, in yogurt, in the very air we breathe. Let’s try to be the kind of vegetarian who gives up lies and corruption

Insisting that Russians will soon lead the world in spirituality, Babaji explained, “Just as a child who has run away from home realizes there is nothing to be gained by running away, when they come home God will bless them greatly.”