On January 4th, 2003, at a ceremony held in Assocham House on Lodhi Road in New Delhi, His Holiness Baba Virsa Singh was given the prestigious OISCA award for his great spiritual service in India. He was among eight top-level people from various fields who were given the OISCA award. OISCA is the Organization for Industrial, Spiritual, and Cultural Advancement. It is based in Tokyo, with branches in many countries. The Honorable Justice V. N. Khare, the new Chief Justice of India, presented the award to Maharaj ji. Giani Ji received it on Maharaj’s behalf and spoke about Maharaj ji’s miracles that he has witnessed since they were growing up together. 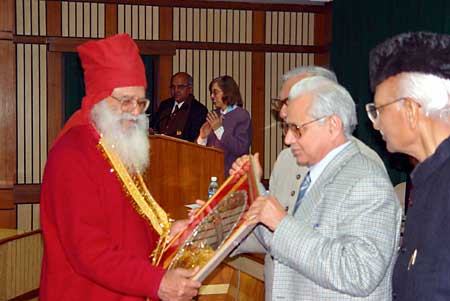 The award citation given to Maharaj ji reads thus:

His Holiness Baba Virsa Singh has been recognized as a spiritual figure of the highest magnitude since he was a child living in a mudbrick village in Punjab. Referring all credit to God rather than himself, he has dedicated his entire life to the practical upliftment and inner development of suffering humanity and to promotion of harmony among people of all religions. Under his inspiration, his self-supporting communities celebrate all prophets’ holy days with sincere love and joy, and his farms demonstrate the practical value of faith in God.

In 1968, Babaji and some of his followers began developing a barren, thorny plot of land on the southern border of Delhi. By extreme hard work and great spiritual faith, they turned this seemingly worthless place into an orderly community with fields, free kitchen, and devotional centers. It is called Gobind Sadan-“The House of God without walls.” Since the 1980s, Babaji and his volunteers have also developed a farm on the banks of the Ganges. What once was an alkaline flood-prone wasteland is now one of India’s mo plains, “God’s grace gives the power and energy for successful development. When people who love God work together, their combined energy is very great.”

For decades, people from all walks of life and all countries-from poor farmers and manual labourers to industrialists, scholars, scientists, politicians, bureaucrats, ministers, Prime Ministers, and Presidents–have come to pay homage to Babaji and seek his blessings. He himself neither reads nor writes, but quotes from all scriptures, tells stories from the lives of all prophets, and explains the teachings of all religions with great clarity. His visionary insights are considered priceless by those who come to sit at his feet.

Rich and poor, old and young, literate and illiterate Hindus, Sikhs, Muslims, Christians, and others from all over the world live, work, and worship side by side in Babaji’s communities. Many ways of praising God are carried on simultaneously by the devotees. The Guru Granth Sahib and Jaap Sahib (Guru Gobind Singh’s hymns of praises of the One who is beyond all sectarian religions) are read perpetually. Havan is conducted around the clock. A beautiful garden has been developed in the Delhi community where Babaji saw Jesus bestowing blessings, and many people of all faiths have found peace and healing there. Nearby a mosque is being constructed, and five Namazes are being faithfully recited daily. Across a rocky hillside there are shrines to Radha and Krishna, Hanuman, Kali Mata, Lord Shiva and Ganesh, Sita and Ram.

Thus Baba Virsa Singh has broken down all the barriers between people that humans themselves have constructed. Encouraging everyone to be aware of the presence of God within themselves and throughout Creation, he has demonstrated that religious discord can readily vanish, and has made it possible for all kinds of people to recognize and love each other as members of one human family.