In Memory of Bibi Jaswant Kaur – The Hira of Gobind Sadan 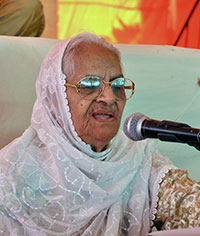 “The Hira of Gobind Sadan,” leaves a legacy of celestial sound and selfless service

“In the future, the Guru’s court will sing these hymns thanks to such as Bibiji. There are certain subtleties in music that only a great ear can hear, and she heard them and adorned them with her voice. We students were only able to understand through her.” Bhai Baldeep Singh in tribute to Bibi Jaswant Kaur

Gobind Sadan sadly bade farewell to its revered kirtanwali, Bibi Jaswant Kaur. Her body was washed and prepared at Gobind Sadan on 26 March and then taken with great respect to Lodhi Cremation Ground in New Delhi. Just as she had left her physical body very quickly, within minutes of speaking calmly with her daughter, her funeral pyre also burned quickly and easily as sangat and relatives sang Jaap Sahib. The atmosphere was unusually peaceful and blessed as if pervaded by a divine chorus of kirtan.

At the bhog of Bibiji’s Akhand Path at Gobind Sadan, kirtan was offered by her loving student Harpal Singh, Bhagat Ji, Bibiji’s daughters, and sangat members, plus the internationally famous Jathas of Lakhbir Singh ragi, and Baldeep Singh ragi. Baldeep Singh, world famous for meticulously recording and preserving classical kirtan often came in between his world tours, just to sit in her room and sing with her. He had just learned of her demise that morning and was still in shock, for he had such great appreciation for her musical knowledge and abilities. He recalled how from Bibiji’s childhood, her father had arranged for her to be taught by the greatest ragis and rababis at the Golden Temple, Amritsar, and thus she learned the classical ragas of Guru Granth Sahib in their purest forms. He said, “In the future, the Guru’s court will sing these hymns thanks to such as Bibiji. There are certain subtleties in music that only a great ear can hear, and she heard them and adorned them with her voice. We students were only able to understand through her.”

Bhai Kirpal Singh, Gobind Sadan’s venerable head granthi, pointed out that under Maharaj’s guidance, Bibiji had never taken any money for kirtan. People were amazed when she refused a 25,000 Rupee award from Bhai Vir Singh Sadan for her kirtan. He recalled the old days when he, Harpal, and Bibiji (often accompanied by Ralph Singh) went from village to village in Punjab to sing kirtan and preach. People’s minds had been poisoned against Gobind Sadan, but when they heard Bibiji’s kirtan and Major Sahib’s talks, “those who were sleeping woke up.” He concluded, “Maharaj called Bibiji the Hira of Gobind Sadan.”

Gobind Sadan’s dearly beloved Bibi Jaswant Kaur whose devotional music enthralled millions passed away this morning. Her kirtan and memory will live on forever in our hearts.

Prayers will be offered at Gobind Sadan at 8:30 am on the 26th March, followed by cremation at Lodhi Cremation Ground at 11 am. Akhand Path will be held at Gobind Sadan, starting the 26th with Bhog at noon on Sunday the 28th. In her 90 years, countless people around the world have benefited from learning or hearing her beautiful kirtan. Tributes can be sent to info@gobindsadan.org to be posted or shared with her family.

Listen to Kirtan by Bibiji