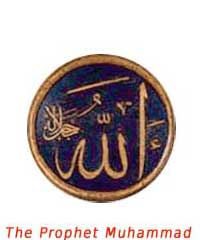 In Islam, the main focus is on God, whose most all-inclusive name is Allah. The Prophet Muhammad (c. 570 C.E. – 632 C.E.) is regarded as a beautiful model for humanity, and a great messenger of God. An angel of God revealed messages to him which he repeated to others, and which were put together to form the Holy Qur’an. It is so beautiful in the Arabic original that people are certain the illiterate Muhammad could not have composed it himself.

The Holy Qur’an reveals that Muhammad is one of many prophets who have been sent from time to time to the people to warn and to teach them the way to God. These prophets began with Adam and included figures honored in the Jewish and Christian Bibles, such as Noah, Abraham, Moses, and Jesus. There is only one God, and only one human family. All people are brothers and sisters. Islam does not recognize any racial distinctions. God is Most Merciful, but those who do not turn to Him face the torments of hell when they die. The word “Islam” means “surrender” (to the will of God), and it also means “peace.”

Faithful Muslims observe five central spiritual practices: They believe in and bear witness to the oneness of God and the prophethood of Muhammad. They pray (do Namaz) five times daily facing the holy city of the Prophet, Mecca. They observe regular fasts for inner purification and inner mastery, including abstaining from food and drink from sunrise to sunset during the entire lunar month of Ramadan, when the revelations of the Qur’an began. They give a prescribed proportion of their income in charity. And at least once in their lifetime, Muslims are expected to make a pilgrimage (hajj) to Mecca.