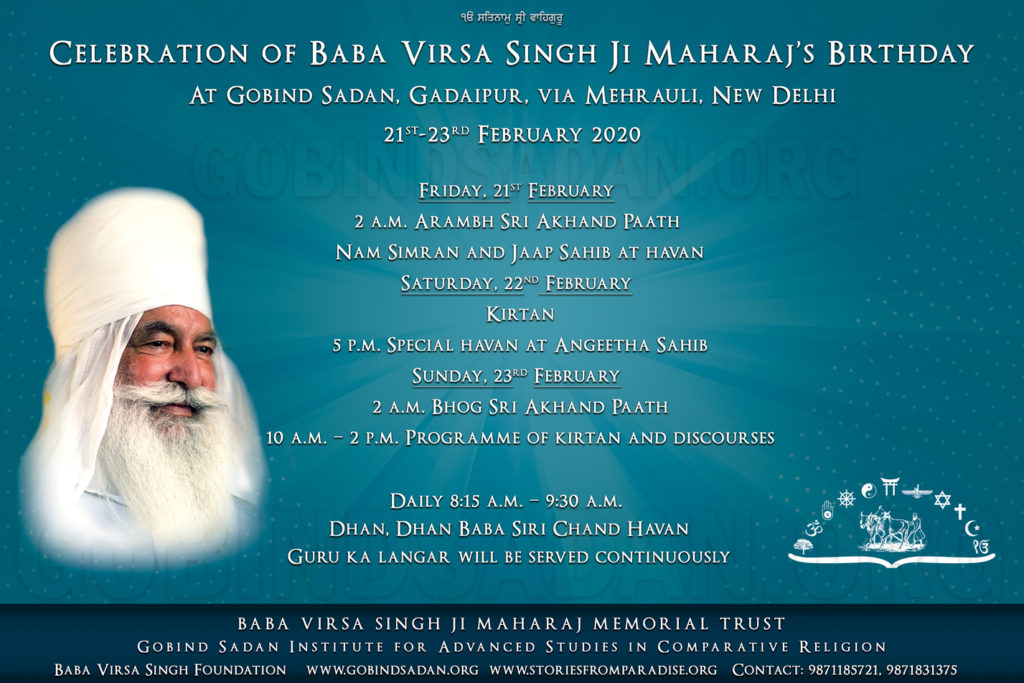 From 21 to 23 February in changeable weather, many sangat gathered at Gobind Sadan to celebrate Maharaj ji’s birthday. The birthday was preceded by all-night worship of Lord Shiva on Shivratri, led by Geeta Singh and his wife Sushil at Maharaj’s World Peace Havan. Young men of Gobind Sadan lovingly restored and cleaned Maharaj’s various vehicles, and then put them on display in a new shed constructed by Mohinder Singh. Two free ayurvedic medical camps were offered.

On 22 February a special havan was held at Angeetha Sahib. Bhog of Akhand Paaths was held at 2 a.m. on 23 February, followed at 10 a.m. with a programme of kirtan and discourses about Maharaj Ji. A long-time Russian devotee, Anatoliy Yarkin from Voronezh, told the sangat, “Meeting Baba Virsa Singh Ji to me and many Russian people became a great event in our life and a turning point in our destiny. His great love truly has no boundaries. Thanks a lot for his kindness, care, and help in all matters. Only here after meeting Maharaj Ji I understood the meaning of real love, true faith in God, and the main purpose of life: service to God and people. I still feel his presence and help, especially here, at Gobind Sadan. Thanks to all people living here, who treat us with respect and love. Thanks to Virsa Singh Maharaj Ji!”

Mehtab Singh, Katha Vachak of Darbar Sri Khadoor Sahib, said about Baba Virsa Singh, “How can we talk about his greatness and his qualities? Qualities can be counted if they are limited, but how can we count if qualities are countless? There is no difference between One God and his saintly sevak. So how can we use ill words against Baba Siri Chand Ji? Babaji has a mission of taking the message to every home that there is no difference between Guru Nanak and Baba Siri Chand Ji.”

Joginder Singh, Jathedar of Gurdaspur sangat, said, “We are lucky that our mentor is Baba Virsa Singh. He himself is One God. First Babaji made us fall in one love with One God, Baba Siri Chand, Hari, Gobind, and then we realized that he himself is one God. We can now say that this place is of Guru Nanak, Guru Gobind Singh, and One God.”