A report by Ludmila Timofeeva, Moscow

On a sunny November morning, sevadars from Russia and Canada, along with Mary Pat Fisher, Gurdev Singh, and others from Gobind Sadan visited in the northern region of Delhi the Sikh temple known as Shahidata Darbar, honoring the memory of its founder, Baba Hari Singh. It is a traditional snow-white gurdwara, which holds the memory of three saints: Baba Hari Singh, Baba Mukhand Singh, and Baba Virsa Singh, under whose blessing it has been operating since the last decades of the twentieth century till his physical death. To date Gobind Sadan carries on the seva of this holy place. 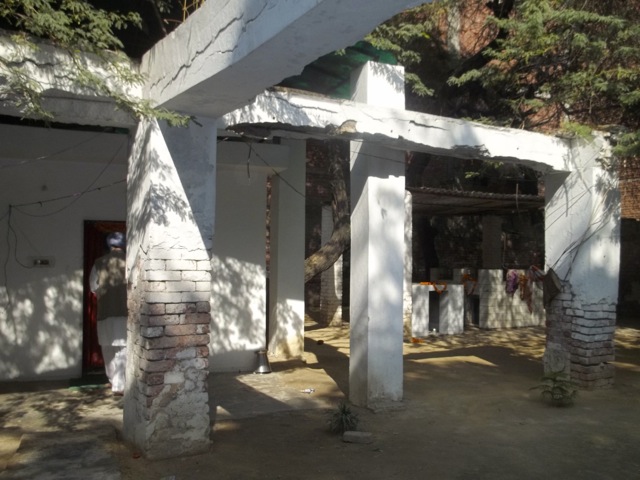 Baba Hari Singh came from Pakistan in the 1940s and prayed rigorously at this place, which was then farmland. Once its owner came and said, “This is my land.” The saint replied, “Yes, but I left something of mine here. Dig up this place here.” When the farmer did so, he was astonished to find an oil lamp still burning under the ground. Understanding that the place was unusually blessed, he allowed the saint to stay.

In the inner courtyard, where the walls of the first gurdwara have been preserved, everything related to Baba Hari Singh has been carefully preserved, including the underground chamber where he meditated in isolation and the tree spreading its  crown above. People could communicate with the saint through the small window of the underground chamber, from which he sometimes treated them to fresh samosas and gelabis which miraculously appeared.

Baba Hari Singh was deeply immersed in Nam. He lived very simply, and many miracles happened around him. The old devotees of the community told us that his devotees heard Baba Hari Singh conversing and singing kirtan with Guru Gobind Singh in the area where the jyot had been found. When one stands on the ground, saturated with such unbelievable hard work, both spiritual and physical, one understands in a deeper manner the meaning of the great spiritual achievers, who had such powerful and magnetic force which created places for the people for spiritual practice.

Returning to the temple, where beautiful singing of kirtan was going on, we passed through the left part of the temple, into the live museum of the spiritual gurus. Here is the room with a big portrait of Guru Nanak, the founder of Sikhism. Guru Granth Sahib, sacred scripture of Sikhs, is reverently placed over the site of the cremation of Baba Hari Singh. Another copy of Guru Granth Sahib is on top of the rope bed of Baba Mukhand Singh, the successor to Baba Hari Singh. Before he left, he said, “Nobody will sit on my gaddi [be my successor]. Instead, people will find the saint who will do a lot of seva, and he will decide about the successor of this holy place.” This saint turned out to be Baba Virsa Singh. Babaji always spoke about this great holy place. In the temple we were introduced to the sister of Baba Mukhand Singh. Her quiet, kind attitude created a good atmosphere for further friendship in the spiritual life of this community.

The portraits of Sikh Gurus graced all other rooms, where one could communicate with and pray to them privately. A narrow corridor leads toward the havan. Devotees read Jaap Sahib around the holy fire, and put a pinch of the havan ashes on their tongue or forehead.

While we were getting acquainted with the spirit, life, and traditions of the community, the final ceremony of continuous reading of the Guru Granth Sahib began in the temple. As the reader sang the text, we were reminded of the reading from the Bible in Orthodox churches. People listened to it, sitting on the marble floor covered with a thick carpet. During the final prayer, they sometimes exclaimed, “Wahe Guru” and there was extolling of the Sikh Gurus, as is done about Christian saints in Orthodox churches. The prayers ended with singing of the mantra “Ik Onkar Sat Nam Siri Wahe Guru.” The holy scripture was then carried ceremonially to its resting place, as people rained flowers on it.

As in all religious places of the world, after the prayer people receive communion with the gifts of the Holy Spirit. Sikhs’ holy food is called “prasad.” And in the central part of the gurdwara, people sat in lines for a communal meal. Free “langar” exists in all Sikh communities for people of all faiths. We also, along with Gurdev Singh and Mary Pat Fisher, participated in the communal meal.

Mary Pat Fisher said, “Baba Virsa Singh left his physical body, but the tradition founded by him for the continuation of the mission of Guru Nanak is being taken forward in Gobind Sadan, in this gurdwara, and in other places. People from more than 80 countries comt to Gobind Sadan and perform service as per his programme. Reciting Nam and Jaap Sahib, serving at the havan, studying Guru Granth Sahib, and getting deeper into the teaching, people change spiritually.” Thus the teachings of the great spiritual teachers are continuing through the simple people.