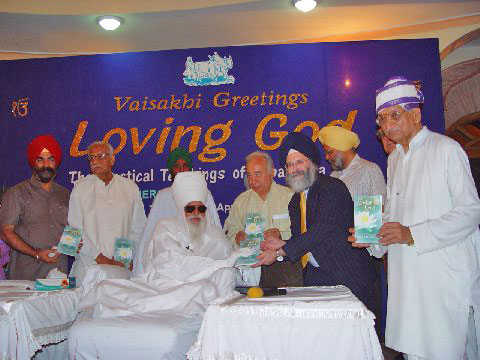 A Turban for Peace

“Those Who Love God Must Care for the Needs of All Humanity. Khalsa is not just for one group. Khalsa must distinguish themselves by their character.”

Gobind Sadan, Delhi
It is especially fitting that on the eve of Vaisakhi when the Khalsa were created to stand for Truth and Goodness for all humanity and all creation, His Holiness Baba Virsa Singh presided over the release of his first internationally published book, “Loving God, The Practical Teachings of Baba Virsa Singh.” (Sterling Publishers).

Babaji has always said that those who love God do not sit idle. They speak out and take action to correct the problems of their day. “Khalsa is not just for one group. It was created to embody the vision of Guru Gobind Singh ji. ‘Recognize all people as one human race,’ to affirm the Vision of One God and one human family, and to meet the needs of all people. Khalsa is one who has controlled their anger, who is ever linked to God through Nam, who never criticizes anyone. When all Prophets and Pirs have come from One God why don’t we show reverence to them all. We have created conflicts by disrespect to each others’ Prophets” Babaji said. “Khalsa means that we distinguish ourselves by our character. Through our actions people will understand that this is ‘a turban for Peace’.”

Among those adding their tributes to the occasion were eminent journalist and Rajya Sabha member Kuldip Nayar who praised Babaji’s efforts to restore civil society and especially mentioned “what impresses me most is that Babaji has offered us a practical example of how we as a nation and a world can overcome our religious differences by respecting all religions.” He also admired Babaji’s personal example of rising from poor beginnings and stressed that “Babaji himself worked and linked people to the land and showed the way for our country to progress.”

Sri Ashok Singhal, leader of Vishwa Hindu Parishad, speaking of the need to unite a diverse nation said “If we want to strengthen the fabric of Indian society, then we should all adopt the teachings of Baba Virsa Singh. Babaji has had a great role in uniting our nation. If the leadership of India would listen to Baba Virsa Singh then we would not have any problems.”

Ranjit Singh Kalha, former Foreign Secretary and Member Human Rights Commission, spoke of how his own relationship with Babaji had guided him through his career. “Even though Babaji himself had never been to school, he was able to answer even my most difficult questions. Babaji’s personal example of honest hard work and loving God, set the model of Khalsa for me throughout my life.”

After the tributes, S.K. Ghai, Chairman of Sterling Publishers initiated the book release commenting on how happy he was to include Babaji’s works in Sterling’s listings and pledged to continue to publish and distribute Babaji’s writings all over the world. Adding their commitment were Marypat Fisher and Ralph Singh, both of Gobind Sadan, who helped in the preparation of the book and the Russian and other guests who shared their appreciation of Babaji’s message.

Here in Gobind Sadan, Baba ji has created a model of how people can live according to the ideals of Khalsa. Prayers are offered at all places of worship according to the teachings of Guru Granth Sahib and meditation goes on round the clock.

And through his own life Babaji has set a perfect example of Khalsa, taking on the burning issues of poverty, terrorism, religious conflict, and constantly finding ways to bring peace to individuals and nations alike.

To overcome the scourge of poverty, Babaji has developed vast wastelands into fertile farms to create an economic base and employment for an entire region. To break down religious conflicts he celebrates the major holy days of each religion and teaches reverences for all scripture and all God’s Messengers. What some may call miracles are everyday occurrences at Gobind Sadan.

“Loving God” embodies the ideals of Khalsa, underscoring that we are all part of One God and highlights the need for each individual to take responsibility for first building their relationship with God and then to work to serve all humanity.

“Do not bewail the state of the society. Change the state of your mind by sowing the seed of Nam. Do not waste a moment. As soon as you start meditating, reciting Nam, and seeking God’s Light within yourself, you rlife will change. As more and more people do so, the world will change.” Baba Virsa Singh Loving God

While Dr. S. A. Ali, Founder member of Hamdard University was unable to attend his tribute graces the back cover:

“Baba Virsa Singh reminds us of and indeed belongs to the chain of the great saints and sages of India who have brought the people together through their extraordinary powers, which include the power of love. We should learn from him the vital lesson of loving and helping not only people within a particular religious community but all those outside it and establish the religion of humanity which is the cornerstone of all great religions and the only road to survival.”