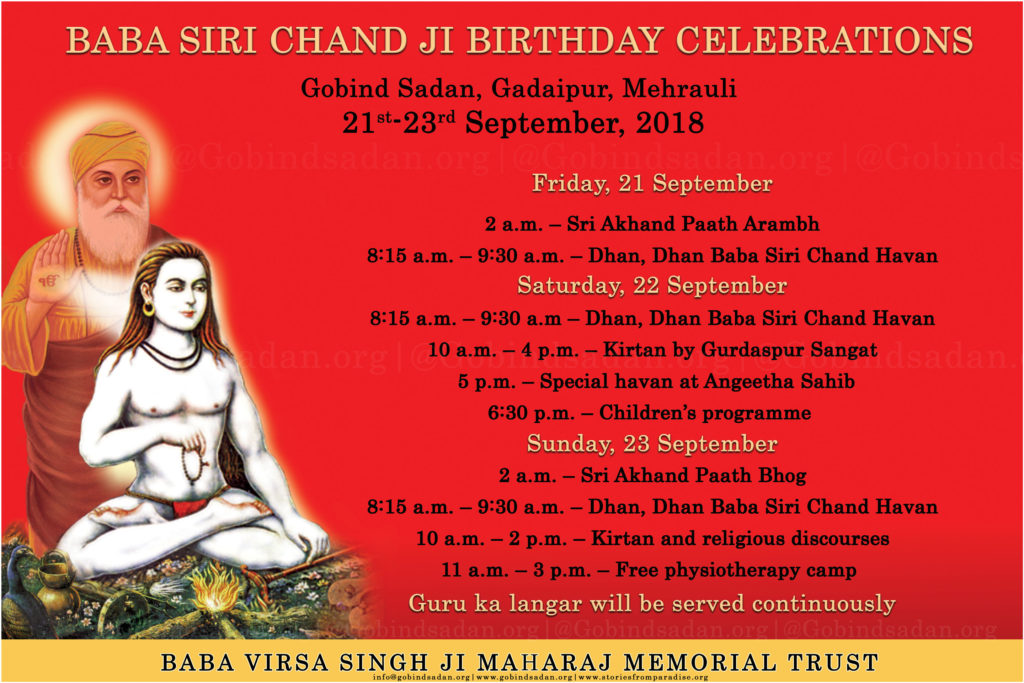 In spite of rain, sometimes heavy, the sangat’s spirits were undampened as they celebrated Baba Siri Chand’s birthday with great love and respect at Gobind Sadan from 21 to 23 September. Especially lovely decorations were arranged for the diwan hall and Baba Siri Chand’s havan, and delicious langar was served throughout.

Seven Akhand Paaths began at 2 a.m. on 21 September and ended at 2 a.m. on 23 September. On 22 September, hours of Jaap Sahib recitation was followed by kirtan by Gurdaspur sangat and other devotees, special havan at Angeetha Sahib, and a children’s programme. A guest of honour who spoke during the special havan was Sardar Manjit Singh Rai, Sikh member of the National Minorities Commission. He said, “I saw Baba Virsa Singh ji in 1980 for the first time, when I came to request him for recommendation for my service, but he only smiled, perhaps because he was seeing that was only a small thing for me.” Manjit Singh Rai then spoke about Maharaj ji, Baba Siri Chand, and Guru Granth Sahib’s message.

The children’s programme at Angeetha Sahib opened with kirtan by Ekta Kaur, Prabhnoor Singh, and Jaspinder Kaur. Then followed a fine explanation of the mission of Baba Virsa Singh Ji Maharaj Public School by Yuvraj, a student of the fifth class. Anjali, Pooja, Kamini, and Khanak of the first class and Riya of the fifth class presented a delightful Jugni folk dance to Sufiana music. Naina of fourth class and Riya of fifth class sang songs about Baba Siri Chand, three boys of third and fourth classes recited Baba Siri Chand’s history, and Simranjeet Singh of Gobind Sadan recited a poem about Baba Siri Chand. It is quite noteworthy that all the recitations and songs were presented from memory in Punjabi, even though most of the children come from Hindi-speaking homes. After a bhangra dance by the school children, the programme ended with kirtan by Gursevak Singh jatha from Ludhiana, Bhai Lakhwinder Singh from Rajpura,  and Bhai Gurdev Singh from Jallandhar, plus Dhadhi Karam Singh Sajan from Ferozepur.

The main programme was held in the diwan hall on Sunday, September 23. Kirtan was offered by Harpal Singh jaatha, including Baba Siri Chand’s Arta in honour of his father, Guru Nanak Dev Ji. Dildar Singh spoke, saying, “We were born Sikhs but we have forgotten Sikhism. It is Maharaj Ji who made us realize what Sikhism is. We keep reading Guru Granth Sahib for years but it takes a lot of time to understanding the true meaning of the teachings.”

Dr. Surjit Kaur, Secretary of Gobind Sadan Institute for Advanced Studies in Comparative Religion, speaking as Stage Secretary, remarked, “What is Sikhism? It means ‘to learn.’ Baba Siri Chand was the most advanced adept of all the saints and pirs of that time.”

Gurdev Singh Preet jatha from Modeltown Gurdwara then lovingly sang, “There is a place in Delhi where Baba Siri Chand’s dhuni ji (havan) is still burning, and we are present at such a good place.”

Gobind Sadan’s imam Jabbar Ali welcomed all the sangat and said, “Baba Siri Chand Ji is blessing us all. We don’t get such love and affection anywhere else which we feel here. Two days ago, we celebrated Moharram and learned that one who has love in his heart is the one who can forgive wrongdoings.  God is happy with those who love others. The ground of Gobind Sadan is a very sacred place. It was the hukam of Maharaj JI that whatever religion we follow, we should follow it sincerely.”

Petra Kiefer, a sevadar visiting from Germany, said, “This place is beyond worldly  experiences, a place so pure and peaceful. Nam is an ocean, and I can feel this ocean of bliss everywhere here. In the West, the conditioned mind makes it difficult to stay in a peaceful state, but here it is very easy to remain in a peaceful condition with the support of God. It is so nice to sit at havan.”

Sant Baba Gurvinder Singh Mandi wale, a well-known Udasi leader, then spoke very appreciatively about Baba Virsa Singh’s role in uncovering the true history of Baba Siri Chand. He said, “Mahapurakh Baba Virsa Singh Ji awakened the Sleepy world and the spirit of the world. If he had not conducted seminars, celebrations, and printing of books about Baba Siri Chand, then perhaps Baba Siri Chand would not have come back into the picture. We have limited Sikhism by cutting it into pieces. Baba Siri Chand embraced all without any distinctions. It gives me great happiness that you are continuing Maharaj ji’s mission. Please continue to tread the path of Mahapurakh. It is full of blessings.” Sant Gurvinder Singh also spoke very appreciatively about Mata Sulakhni, wife of Guru Nanak Dev Ji and mother of Baba Siri Chand. “She could not go and have his darshan (while he was away so long on his udasis) because it was Guru Nanak’s order to stay home and take care of the children. Such was the plight of the wife who is unable to go and meet her husband. She spent most of her life at her parents’ house, yet when people spoke against her husband, she told them not to criticize him as he is the embodiment of God.” Gurvinder Singh also said,  “Baba Siri Chand is the form of the Formless One.”

Gurdev Singh told the sangat, “Maharaj Ji was trained by Baba Siri Chand. What was that training? It was the mission of Guru Nanak. The Udasi sect was forcefully cut off from the mainstream of Sikhism, but Baba Virsa Singh Ji made efforts to unite them with the mainstream.” He then recited his poem on Baba Siri Chand.

Bhai Sukhjit Singh, Udasi follower of Sant Gurvinder Singh, said, “Baba Siri Chand is the one who established havan everywhere, and he also established the havan of Nam in our hearts. He was only seven years old when Guru Nanak left for his first udasi (preaching journey). His sister Bibi Nanaki raised him as an embodiment of God-incarnated Nanak. He used to keep reciting Guru Nanak’s verses. She noticed that he used to get up and sit in meditation at the same time as his father had.  She asked him if he were afraid or missing his father, but he replied, ‘I am not scared. I get up because Nanak Sahib Ji said to get up early at amrit vela and be immersed in the love of God.’” Bhai Sukhjit Singh concluded, “Unless one develops renunciation, non-attachment, he cannot become Guru Nanak’s Sikh.”

MLA Sri Kartar Singh Tanwar, who is doing very good seva for Gobind Sadan’s functions and everyday needs, came to pay his respects and asked the management if the arrangements he had made for extra water supply were adequate.

Dr. Rai Singh, President of Baba Virsa Singh Ji Maharaj Memorial Trust, concluded the programme by saying, “Gobind Sadan was established to foster brotherhood not only here but in the entire world.”