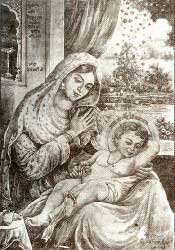 With Mata Sulakhani ji at birth 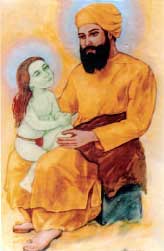 Babaji was born in 1494, in Sultanpur Lodhi, District Kapurthala, Punjab. He entered the world laughing and the room was filled with light and fragrance. A thin layer of ashes covered his body and the small curly knots of his hair shone brightly. He was no ordinary son, though he literally worshipped his father. He was a yogi from birth, his right ear lobe extended into a natural ring. Many consider him an incarnation of Lord Shivji. From childhood he loved to sit in meditation and developed great powers.

Once he wandered into the jungle. When the town’s people searched for him fearing he’d be harmed, they found the child deep in meditation surrounded by elephants, tigers, and leopards and other wild animals sitting motionless with eyes closed.