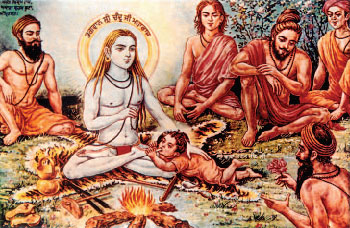 While Babaji himself lived an ascetic life, he not only supported family life, he actually raised the baby Dharm Chand and arranged his marriage. Here he is seen nursing the baby from his toe

One day when his brother Lakshmi Chand ji had been hunting. Babaji told him it was a sin to kill innocent animals and that he would have to give account in God’s court. Hearing this, Baba Lakshmi Chand took his entire household, even the dog, mounted his horse and rode toward Heaven. Baba Siri Chand ji realized that his brother’s baby Dharm Chand was the last descendent of Guru Nanak. If the baby left too there would be no one to carry on Guru ji’s blood line. So Baba Siri Chand ji stretched out his arm into the sky, lifted the baby from his brother’s lap, brought him back and raised him as his own son.