People of all religions and all social levels felt that Baba Virsa Singh, revered teacher from Sikh background, belonged to them. And ever since he left his mortal frame on 24 December , they have been spontaneously going to Gobind Sadan—the unique interfaith community he developed on the southern border of New Delhi—to honour him in their own ways. This spontaneous outpouring of devotions by people of different religions is a reflection of Babaji’s teachings. He often said, “There is only one eternal message of religion, and it has always come from the same Source. As people gradually learn to accept this truth, our nervousness and angry conflicts between sects will cease and we will all recognize each other as brothers and sisters.”

On 28 December , after their Friday prayers at Gobind Sadan’s mosque, the Muslims from the surrounding area went to offer a special prayer for Baba Virsa Singh at Gobind Sadan’s assembly ground where his body had been cremated. Many Sikh men joined them and they embraced each other afterward. The imam, Jabar Ali, explained, “Maharaj’s love is so deep-seated in our heart that it is very difficult to express it. But it is our duty, our work to show that love before God. Maharaj has put us on this path, has showed us the way. This path has great importance in our life, because in this world people only listen to these things but nobody had the initiative to do them as our Baba Virsa Singh Maharaj did. He made this mission successful. We all went to pray for this mission. We will always be praying that God will keep the mission that Maharaj started going forever, and keep our love for Maharaj continuing forever.”

Day and night, Sikhs, Hindus, Muslims, and Christians are keeping vigil at that site and reading Jaap Sahib, the universal hymn of God’s praises written by Guru Gobind Singh, the Tenth Sikh Guru. Among them are Russians who are doing volunteer work at Gobind Sadan, reading Jaap Sahib in Gobind Sadan’s Russian translation. They are also reading Jesus’ resurrection message to his disciples that he was sending God’s Holy Spirit to work in them. Ludmila Timofeeva of Moscow says, “Ever since I first met Maharaj ten years ago, I understood that he is Holy Spirit.” 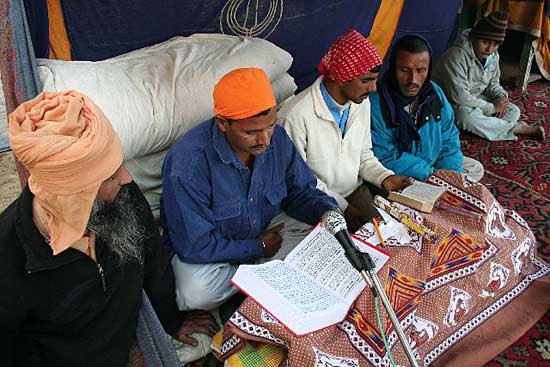 Hindus working as gardeners at Gobind Sadan have read the entire Ramayana at the assembly ground. This tribute was organized by Ramesh Chandra Verma, caretaker of Gobind Sadan’s foreign guest compound. Mr. Verma says, “Only Maharaj knows how this idea came from my inner self. Maharaj believed that every religion is equal. That is why every religion should do something—Jaap Sahib, Hanuman Chalissa, Qur’an Sharif, Bible, Gita—everything should be read.”

Geeta Singh, a Brahmin who has spent his entire adult life doing puja and also farm work at Gobind Sadan, has read the Bhagavad Gita at Maharaj’s Place, along with his family. He explains, “Maharaj loved every religion. For him, all religions are equal. He used to love Ramayan, Gita. Many years ago he gave the Gita to my wife, and that is still with us. Now that Maharaj has left, we have read Gita from that book, with deep love. I’m very pleased when all scriptures are recited.” 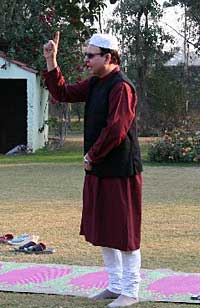 Dr. and Mrs. Syed M. Hussain, who live at Gobind Sadan, organized a reading of the entire Holy Qur’an by orphans from Jamia Usmaan Ibne Affan. Each boy was given one Surah, and with great devotion, they read all the Surahs simultaneously. Afterward, Dr. Hussain preached to them about Baba Virsa Singh’s great message of the oneness of all religions. He urged them to develop interfaith appreciation, instructing them that Babaji always said that if one truly studies other scriptures and prophets, he will surely find that they are all valid and all lead to the same Source.

Beginning on 4 January, the entire Guru Granth Sahib will be read in 48 hours, followed by the last rites for the revered teacher. These will be held at Gobind Sadan on 6 January, beginning at 2 a.m. with Akhand Path bhog and culminating with the final prayer and public tributes to Baba Virsa Singh at 1 p.m. People of all castes and creeds, including eminent figures from India, Russia, and the United States, will be attending. Babaji’s devotees do not regard that event as an end, but rather the beginning of a great effort to spread his teachings around the world. 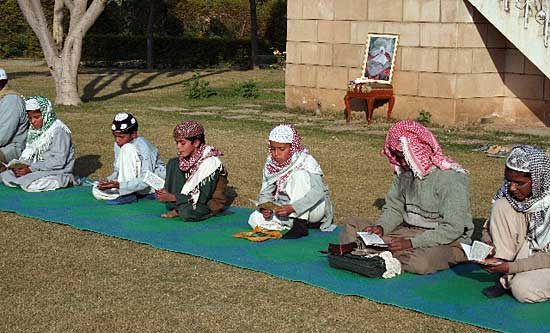