The Love Between Babaji and the Gurus 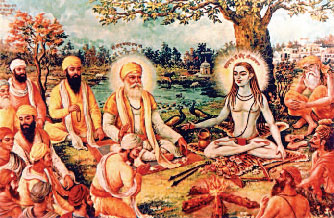 Babaji was so impressed by Baba Mohun ji that he accepted him as his disciple. Instructing Baba Mohan ji to collect the writings of his father, Guru Amar Das ji, Baba Siri Chand ji gave him the hand written collections of Guru Nanak Dev ji’s bani for safekeeping until they were required. He then sent him home to Goindwal Sahib with Guruji. Baba Mohan ji used to sit on a deerskin for long periods in meditation with his long hair open.