While many seminars end with unfulfilled pledges to bring peace or generate white papers and letters to present to world leaders, Gobind Sadan Institute’s successful international seminar “Blessed are the Peacemakers: the spiritual approach to peace,” concluded with national and international leaders coming to join the gathering of 1000s to celebrate the birthday of Gobind Sadan’s beloved founder and preceptor the great visionary and healer Baba Virsa Singh, Maharaj. Swami Roshan Lal, Vice President, Arya Samaj repeated the adage “Who has more power the king or the saint: the saint never goes to the king – rather the king always come to the feet of the saint.” And nothing could be more evident than the parade of officials thanking Babaji for what he has done to bring them peace and transform them personally and what he has done and is doing to bring peace in India and the world.

The Russians opened the stream of tributes. Yuriy Ageshin, President Chamber of Law, Russian Federation, “It is a very historic event when a spiritual being comes to show people the way. In 1989, Babaji came to Russia and warned of the breakup of the Soviet Union if we did not change our policies. Unfortunately at that time we were not able to heed his warning and since then we have had great problems. While we have asked him to return he said he would only come after we recognized our mistake. So finally he answered our prayers and visited us in May of last year, giving us great strength and promising that Russia would now make great progress. We are all forever grateful for Baba ji’s blessings.”

Vladimir Mokriy, Vice-Governor of the Russian State of Samara and Chairman Duma Committee for Democratic Reform, started his talk saying that while he faces many challenges in dealing with Russia’s problems he always remembers that he has the Great Power of Babaji standing behind him. Babaji has brought so much hope to Russia, that he wants that next year Babaji’s birthday will be celebrated in Russia.” 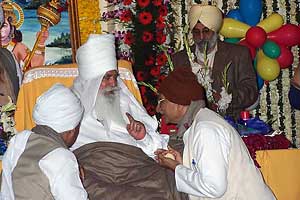 That was followed by Murli Monahar Joshi, former Union Minister of Human Resources Development saying that while he was happy that Russia would celebrate Maharaj ji’s birthday, he awaited the day when Babaji would be recognized by the United Nations and called to settle all the disputes of the world. 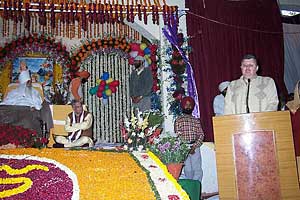 Andrei Belianinov, “Babaji should have been born in Russia”

Andrei Belianinov – Russian Minister of State for Defense Production, then raised the emotions of the crowd of people from all religions and all walks of life, when he said he was jealous that Babaji had been born in India. “The Russian people love Babaji so much that Babaji should have been born in Russia.” This brought forth even more statements of love and admiration from the Indian devotees present. S. K. Chhibber, former Governor of Mizoram who had invited Babaji to settle the conflict spoke of the miracles Babaji had shown him and how Babaji’s very presence was able to wipe away the cloud of fear that hung over the state and bring a lasting peace to the worst terrorist outbreak in modern India. He cited Gobind Sadan itself as a miracle: “what has developed here could not have been done by any man. Only that Power could have done it.” Swami Roshan Lal Arya Samaj leader then added “Baba Virsa Singh should be recognized as the Yug Pursh of this age, our 20 crores followers are all with Maharaj..” But the crowning statement came from none other than Sri Ashok Singhal, International Chairman of Vishav Hindu Parashid, sitting at Babaji’s feet he told the delighted audience that “Babaji is my spiritual advisor and I too am with Babaji.”

While leaders spoke of Babaji’s power to heal a wounded world, people from India and the U.S. spoke of how Babaji had healed their cancer or blessed them so that they did not require open- heart surgery.

Babaji in his address said he was always surprised when people spoke of him appearing to them or healing them as it was God’s greatness and that he himself never knew what happens. He pointed to God’s Power, of Nam and Jaap Sahib to heal not just people and countries but to stop the Holy River Ganges from flooding. Relating the story, Babaji said that people approached him last year saying that the river was cresting and was about to wipe out their village and asked him to pray for them. Babaji said Mata appeared to him and agreed to spare the village. He told the villagers to do ardas and offer prashad to Mata Ganga and she would recede. While the people were so happy that their village was spared, Babaji responded that these are common things for God. “Everything is under God’s command, the trees, the air, the earth and water. God resides everywhere. God is also present in those we may consider atheists. To God there is no question of high or low or which religion one belongs to, His spirit is within everyone and His Light radiates throughout the entire cosmos. If people understood this simple fact then the killing and conflict in the world would stop and peace would prevail and I see that that will happen soon.” With that the crowd erupted in joyous singing and dancing and the celebration continued long into the night. 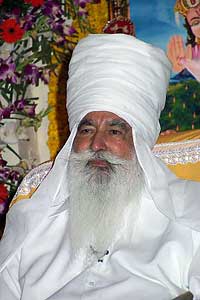