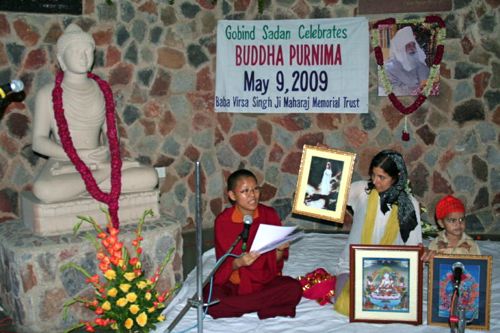 See more photos in the gallery

The programme began with the installation in three stone meditation cabins of three female Boddhisattvas: Green Tara, White Tara, and Guan Yin.Ven. Sonam Wangmo explained the qualities and special mantra of each deity.

Bhai Kirpal Singh of Gobind Sadan spoke about Buddha’s life and teachings, from his vast knowledge of all religious traditions.

The monks and nuns led chanting from Tibetan Buddhist and Theravada traditions and then gave dharma talks. Ven. Sumedha explained that if desire and anger are eliminated from inside, the person becomes a good human being. He emphasized the need to teach ordinary people of all religions to practice the basic virtues described by the Buddha.

Ven. Sonam Wangmo said that giving with detachment is the most important of the virtues. She explained that the ideal of Boddhisattvas is to exchange their  own inner happiness for the sufferings of others, without thinking of themself.

Ashin Nyana Dipa spoke of the interfaith nature of the teachings of the Buddha, because “people of all religions have a mind and a body.”  He emphasized mindfulness, because “If we have no mindfulness, we never know that we are angry or greedy. You should know your condition at every time, whether walking, sitting, or standing.”

Hardip Singh thanked the participants and audience on behalf of the Baba Virsa Singh Ji Maharaj Memorial Trust, and noted that it is by Maharaj’s example and teachings that Gobind Sadan is continuing to celebrate all religions.

Concluding the programme,Ven. Sonam Wangmo led chanting of Om Mani Padme Hum, and dedicated the programme for the benefit of all sentient beings.

Gobind Sadan sevadars were so inspired by the programme that they requested Ashin Nyana Dipa to lead a class in vipassana (mindfulness) meditation the next day.  He conducted the class in Buddha and Mahavir’s pavilion, which is also the site of silent meditation sittings every morning and a class in Nam and Jaap Sahib for children of the area every afternoon.

Buddhist teachings continued in the weekly children’s class on Sunday. Children, special guests, and sevadars acted out and considered the significance of the Jataka Tale of Angulimala, the feared murderer who became a noble devotee of the Buddha.