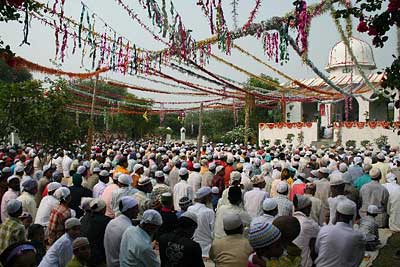 Gobind Sadan, “God’s House without walls,” celebrated holy days of both Islam and Hinduism on October 2 with equal enthusiasm, as per the interfaith tradition long established by Baba Virsa Singh, revered founder and patron of Gobind Sadan. Some one thousand Muslims, plus Sikhs and Hindus, came to Gobind Sadan’s mosque to celebrate the end of Ramazan with a special Namaz and langar. Abdul Jabar Ali, the imam of Gobind Sadan’s Nur-i-Illahi Masjid, in his address before the Namaz, spoke of the critical importance of brotherhood among people of all religions: “What is the happiest thing about Gobind Sadan? That we people all get together in one place-Hindus, Muslims, Sikhs, Christians. We celebrate Eid together, and we all embrace each other. We feel that this which Baba Virsa Singh Ji taught us is very good and very true, and we want to explain it to the people. If we will follow his teaching, we can bring love and peace, and the walls of hatred will come down.”

At the same time, 10 pandits from Bikaner, Rajasthan under the supervision of Acharya Mahavir Prasad Ji Joshi were performing the third day of Navaratri puja in the lovely havan in the garden of Baba Virsa Singh, who left for his heavenly abode last December. All spiritual traditions that he initiated and supported have been carried on without stop, under the management of the Baba Virsa Singh Ji Maharaj Memorial Trust.  Gurmukh Singh, an elder of Gobind Sadan who paid his respects at the mosque and also presided over the Navaratri puja, said, “Babaji always taught us to carry on puja during the holy days with great love and respect, according to the traditions, and we are continuing to do so.”

Baba Virsa Singh had for decades been teaching the same basic interfaith message: “All the Prophets have come from the same Light; they all give the same basic messages. None have come to change the older revealed scriptures; they have come to remind people of the earlier Prophets’ messages which the people have forgotten.  We have made separate religions as walled forts, each claiming one of the Prophets as its own. But the Light of God cannot be confined within any manmade structures. There is one God, and we are all His children. We are all brothers and sisters.”