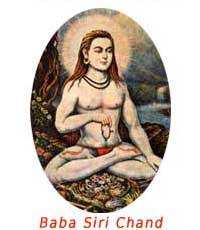 Maharaj Baba Siri chand Ji was a great Udasi saint, as described by Hazrat Mian Mir in his conversation with Emperor Jehangir. Mir referred to Babaji as the “Emperor of all Fakirs.” Eldest son as well as the disciple of Guru Nanak Dev Ji, Baba Siri Chand Ji was highly respected by kings, saints, yogis, Sikh Gurus, and the common people of all sects and religions. Babaji devoted his long life (149 years) to meditation, preaching Nam, and to moral, spiritual, and religious uplift of society, helping the poor, the downtrodden, and those in need. As directed by his father and Master, Baba Siri Chand Ji played a unique role of setting the sadhu samaj on the right path.