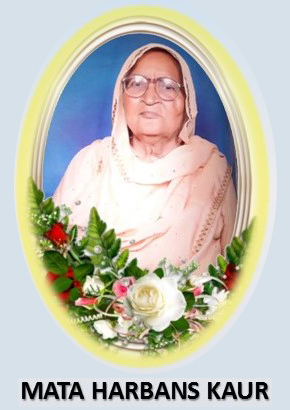 In the 1960s, the people of Karnal (now in Haryana) came to know about the spiritual power of young Baba Virsa Singh. They started visiting him in Sarawan Bodla village near Malout in Punjab. Harbans Kaur came with them and then stayed to do seva for some time. She had no child, so she continued to visit Sarawan Bodla to ask Babaji to do Ardas for that purpose. Then as she became attached spiritually with Nam and seva, she forgot about any worldly desires. Because of the blessings of Maharaj ji, she was not discouraged even by the death of her husband Sardar Santa Singh during that time.

When Maharaj Baba Virsa Singh Ji went on his spiritual tour to Karnal, Chandigarh, Amritsar, Simla, and Delhi, she often joined the sangat travelling with him. Then when Maharaj ji got hukam from Guru Gobind Singh Ji Maharaj to establish Gobind Sadan in the south of Delhi, Mata Harbans Kaur ji also contributed her seva to establishing Gobind Sadan.

There were no living male or female members in her parental or in-laws’ families, so she had to manage the responsibility as the only member of both families. For this purpose, with the hukam of Maharaj ji, she got the help of Maharaj’s older brother, Sardar Mehal Singh and his sons, Savinder Singh and Lakhvinder Singh.

In the late 1990s, because of her old age, Maharaj ji called Mata Harbans Kaur to Gobind Sadan and gave her hukam to reside there permanently and take the responsibility of langar. In addition to her langar seva, she was also doing meditation regularly and taking duties at havan. During the past few years, despite her declining health, she continued visiting the havan regularly. Mata Harbans Kaur Ji took her last breath in Gobind Sadan on 9 August, 2020. The whole sangat came to pay their respects.