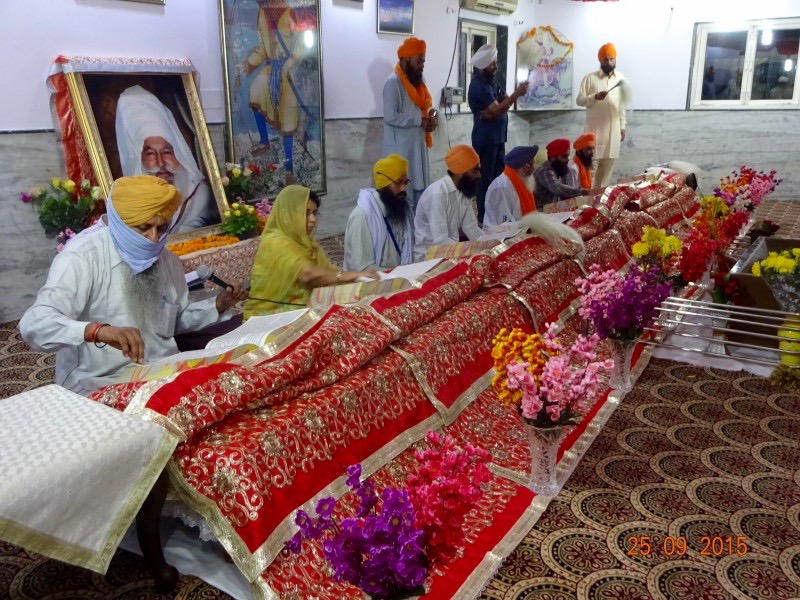 Baba Siri Chand’s birthday is always celebrated according to the lunar calendar at Gobind Sadan, and this year the date fell very late in the calendar: 23 September. On that day, 7 Akhand Paths were started, and an excellent seminar was held on “The Non-Sectarian Nature of Indian Saints” (see separate article).  Many old sangat came for the celebrations, and there was a special atmosphere of bliss permeating all the events.

On Friday, 25 September, the first set of Akhand Paths finished at 2 a.m., and a second set of seven Akhand Paths began. Then at 9 a.m., Eid-ul-Zuha was celebrated in Gobind Sadan’s mosque. As always at Gobind Sadan, Muslims were joined by Sikhs and Hindus in doing Namaz and in preparing the rice pudding (semian) served to the congregation after prayers. Late in the afternoon, a special havan was held in Maharaj’s Angeetha Sahib (samadhi place). In addition to chanting of Jaap Sahib and “Dhan Dhan Maharaj Ji,” Maharaj’s wonderful bus was brought for the occasion. The sangat were extremely touched to bow there, with the side door open and Maharaj’s picture placed on the sofa inside.

Saturday, 26 September was celebrated by a children’s programme featuring the students of Baba Virsa Singh Ji Maharaj Public School and other children from Gobind Sadan and Gurdaspur. They recited the history and teachings of Baba Siri Chand, sang kirtan, and presented a cultural programme. At the end of the programme, each of the children was given a precious hardbound copy of the Bhagavad Gita. Afterward, Gurdaspur sangat sang their ecstatic hymns in the central dera up till nightfall.

On Sunday, 27 September, the second set of Akhand Paths were finished at 2 a.m. Then the sangat filled the diwan hall to pay obeisance to Guru Granth Sahib on a high platform, listen to kirtan, and hear talks about Baba Siri Chand. A special address was given by Dr. Jaspal Singh, Vice Chancellor of Punjabi University, Patiala. He spoke of his deep research into early Sikh history, especially the roles of Baba Siri Chand and the Udasis in spreading Guru Nanak’s mission. Another special speaker on the occasion was Mr. Jagjeet Singh Dardi, Chairman of Chardikala Time TV, who later broadcast a special programme about Baba Siri Chand’s birthday on their international channel.