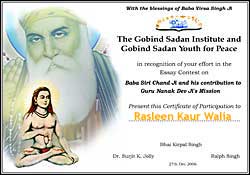 We live in a magic world, where every second something new happens, which is done by the human beings but is indirectly controlled by it’s magician “God”. This magician is totally different from that of fairy tales. He takes our test every minute to check our accountability towards the work assigned by him:- to spread truth and happiness all around. Yes, we all human beings are sent to this world to sustain peace and brotherhood among all the people. But some people get diverted and follow the path of violence and hatred. Therefore to keep a check on all such people our magician God sends his angels to earth to again teach those diverted people to get back on the path of truth and non-violence. One such angel was sent to help people on the earth in their bad times. This angel was: Baba Siri Chand Ji.

He was a great mystic and eldest son of Guru Nanak Dev Ji and lived 149 years from 1494 to 1643. He was born in Sultanpur Lodhi District, Kapurthala, Punjab. He was a yogi from birth, his right ear lobe extended into a natural ring.

Baba Siri Chand Ji was Guru Nanak Dev Ji’s first disciple. He learnt meditation and spiritual truths from him. He was sent to Pandit Parshotam Das Kaul for his schooling at Sri Nagar. There he always stood first in the class and was also able to defeat Samnath Tripati in shastri debate. He stayed there for two and a half years. His brother Lakshmi Chand Ji used to hunt animals. Babaji told him that it was a sin to hunt animals and he would have to give account in God’s court.

Baba Siri Chand Ji loved and respected Guru Nanak Dev Ji so much which cannot be expressed in words. When Guru Sahib came back home from his Third Udasi when Babaji and whole Kartarpur Sangat welcomed Guru Ji by singing the -Arta- compose by Baba Chand Ji in Guru Sahib’s Praise.

When Guru Ram Das Ji visited Barath in 1634, Babaji was in deep meditation. Guru Ji waited patiently for two days. When Babaji came out, Guru ji offered him Rs500 and other gifts of clothings and sweets.

Like this many Gurus visited Babaji some of them offered three sons to become Baba Siri Chand Ji’s disciples.

Once Baba Siri Chand Ji went to Charnba. The boatman taunted Babaji that if you have so much powers then why do you need a boat? So Babaji stood on a rock and asked him to ferry him across the river. The stone which Babaji rode on is still as a memorial to Him on the Banks of River Ravi.

Now, very less people in our world know him and his stories of miracles, but, he dedicated his life to us by spreading truth and happiness among the people.