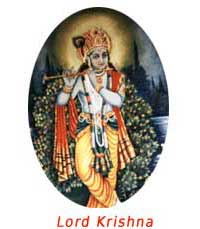 Lord Krishna is one of the beloved manifestations of God revered in what is called “Hinduism.” A more appropriate title for this constellation of religious beliefs and practices is “Sanatana Dharma”–”the ancient way of righteousness. ” They have arisen over the millennia in India and permeate everyday life to today.

The most ancient scriptures in Sanatana Dharma are the Vedas. They were heard by great sages of the distant past who received enlightenment through their meditation practices. Later came more scriptures praising certain gods and goddesses and describing specific means of meditation, and great epic stories–the Mahabharata and Ramayana–which inculcate noble qualities in the people.

In general, Hindus feel that there is an all-pervasive but invisible Reality which has often taken human form to bring the people back to righteous living when they have strayed far from dharma. Life goes through extremely long cycles from truthful and pious living to irreligious and degraded periods such as the present one, which is called Kali Yuga. But truth will again prevail, and the cycle will begin again.

Human life is also cyclical. A person is born as a baby, with his life circumstances influenced by his karma–good and bad thoughts and deeds in his previous lives. Once he dies, he or she is reborn, again reaping the harvest of previous karma, be it good or bad. This reincarnation goes on again and again, with the soul always longing for its ultimate goal of union with the Supreme. Many teachers and texts in Sanatana Dharma have taught that this worldly life is fleeting and illusory; a certain detachment from worldly concerns is necessary to perceive the eternal Reality. To concentrate on the Eternal, one focuses on his or her favorite deity, whether Krishna, or Shiva, or Durga, or Rama, or any of many other gods and goddesses. Each is an embodiment of the same Paramatma, the same Supreme Spirit. People are free to worship whichever deity they choose, according to the universal message of the Vedas: “Truth is one. The wise know it by many names.”