300th Anniversary of Coronation of the “Eternal Guru” brings representatives of major Bhagats of Guru Granth Sahib together with Panthic leaders, ragis, and scholars in Gobind Sadan 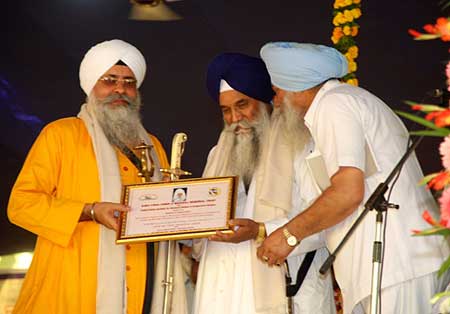 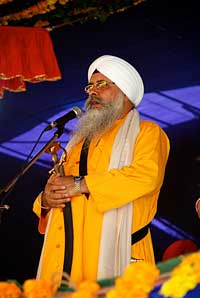 With Jathedar Gurbachan Singh ji Akal Takhat, the highest seat of Sikh temporal power, along with Jathedar Giani Iqbal Singh ji of Takhat Sri Harmandir Patna Sahib presiding, Gobind Sadan’s 300 year Gur-ta-Gaddi Celebration, marking the coronation of Guru Granth Sahib as the Eternal Guru, took unprecedented form, as Nihang Sikhs, distinguished scholars, politicians, and world famous ragis, joined in singing praises to the Living Guru. But what made this celebration so outstanding was the work of the Baba Virsa Singh ji Maharaj Memorial Trust in gathering and honoring the descendants of the major Bhagats represented in Guru Granth Sahib.

Noteably, representatives of Bhagats Kabir, Nam Dev, Ravi Das, Dhanna, Parmanand, Jai Dev, and Baba Sheikh Farid were present. They came from as far away as Orissa (Bhagat Jai Dev), from Chauru, Barsi, Maharastra, Varanasi, and Faridkot. They were joined by representatives from Ajmer Sharif, home to Mohiuddin Chisti, the Saint who brought Islam to India, from Haridwar, and by the leading Udasi and Nirmala Saints.

Siri Guru Granth Sahib’s 1432 pages of revelations are composed in some 31 ragas (classical Indian melodies). Kirtan, singing God’s Praises, comprises an essential part of every Sikh’s life and daily worship, but few living singers still have command of the original ragas and offer more modern composition. Baba Virsa Singh ji was adamant that this treasure of our culture should not be lost and appointed Bibi Jaswant Kaur as Gobind Sadan’s (hazuri) resident artist. Now in her 80’s has consistently won awards as one who can still perform all the ragas of the Gurbani. She was joined by other renowned ragis, Bhai Charamjit Singh Lal, Bhai Ranjit Singh Chandan, and classical artist Preeta Balbir.

Delhi Chief Minister Sheila Dixit, Swami Roshan Lal Arya, Vice President of Arya Samaj All-India, addressed the gathering and a letter from Sri Ashok Singhal (who serves as one of the Trusts patrons).

In 1708, at Sachkhand Nanded Sahib, Guru Gobind Singh ji placed Guru Granth Sahib on the Guru’s Gaddi and bowed with full reverence. Then he called upon all his followers to regard Guru Granth Sahib as the Eternal Living Guru from that day onwards.

In 2006, the Head Granthi of Sachkhand Siri Hazur Sahib, approached is Holiness Baba Virsa Singh ji to bless the occasion. He asked Babaji the best way to celebrate this auspicious day. Babaji answered: “Guru Granth Sahib is unique as a world holy scripture. In addition to the bani of 6 of the 10 Gurus, Guru Granth Sahib purposely includes the bani of 30 contemporary Saints and Bhagats from the different castes, languages, regions, and religions of India, to show that God is above any parochial boundaries and to pave the way for a pluralistic civil society which exhibits love and peace among all without any discrimination.”

It is worthy to note that ancestors and representatives of the leading Bhagats took part.

Throughout the festivities the Nihangs known for their daring riding and martial arts skills entertained the sangat. None so dramatic as the fire breathing young man at dusk.