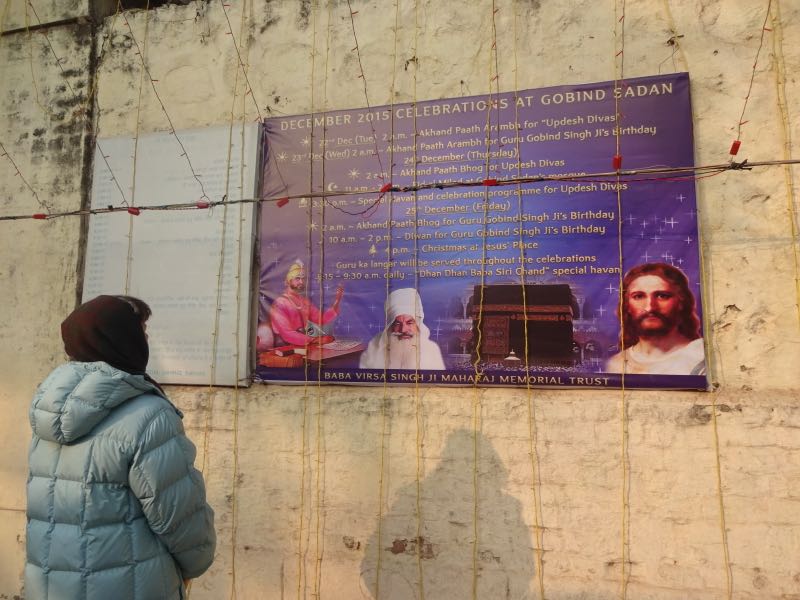 The spirituality and excitement at Gobind Sadan spiraled higher and higher during celebrations of four special events on December 24 and 25, 2015. The celebrations actually began two days earlier, with Akhand Paath for Maharaj Ji’s “Updesh Divas” beginning on 22 December, and Akhand Paaths for Guru Gobind Singh’s Birthday beginning on 23 December. After the Bhog of Maharaj Ji’s Akhand Paath on 24 December at 4 a.m., people of all religions gathered at Gobind Sadan’s Nur-i-Illahi Mosque to celebrate Eid-al-Milad, the Birthday of Prophet Muhammad. Gobind Sadan’s imam Jabbar Ali took as his subject, “We don’t know who we are and where we came from.” He explained that Allah created the Prophet out of His own Noor (spiritual Light) and put that same Noor inside all people. “If anyone criticizes other prophets and scriptures, God will never be happy,” the imam said. Other members of his congregation offered songs and poems in honour of the Prophet Muhammad, and Hardip Singh, Gurdev Singh, and Rai Singh of Baba Virsa Singh Ji Maharaj Memorial Trust spoke about Maharaj Ji’s interfaith mission.

On the afternoon of 24 December, sangat from near and far gathered at Maharaj Ji’s Angeetha Sahib for Updesh Divas special havan.  The next morning at 2 a.m. there was Akhand Paath Bhog for Guru Gobind Singh Ji’s Birithday, followed from 10 a.m. by kirtan by excellent kirtan and talks in honour of Guru Gobind Singh Ji. MLA Chaudary Kartar Singh Tanwar came to congratulate the sangat on the occasion. He had given great assistance in providing water for the sangat from government tubewells. Dr. Surjit Kaur Jolly emphasized that Guru Gobind Singh brought the message of peaceful co-existence and gender equality. On behalf of Baba Virsa Singh Ji Maharaj Memorial Trust, Dr. Rai Singh and Hardip Singh congratulated the sangat and praised the contributions of Guru Gobind Singh.
The last event was Christmas, for which thousands of people gathered at Jesus’ Place. Sikh, Hindu, and Muslim girls dressed in white sang traditional Christmas carols. Angelina of Indian and Kazakhstani parents recited a Christmas poem in Russian. Imam Jabar Ali said, “The first necessity is love; it spreads outward from the family level. People should learn love at holy places.”  Rev. Bhaskar of St. John’s Church in Mehrauli said, “This event is a great example of interfaith. Where there is love, there are no walls of hatred. Maharaj is among us, with all His love.” Mr. Ansari of Nor-i-Illahi Mosque wished everyone a Merry Christmas and observed, “No religion teaches us to hate. If you help anyone, God will be glad. Brotherhood is present here—it is a Ganga [great river] of Love.”

A jolly group of young devotees from Kazakhstan and Russia held candles and sang carols in English and Russian.  Manjeet Kaur and her daughter made a happy announcement that she had been declared free of cancer after fighting serious cancer for years with great faith and Maharaj Ji’s blessings. Children of Baba Virsa Singh Ji Maharaj Public School presented a play in which sick Santa is healed by children who give him gifts, upon which he declares that they have the true spirit of Christmas.

Dr. Rai Singh encouraged the sangat to follow the order of all prophets to love, work hard, and share whatever you have. Ekta and Prabhnoor sang two kirtan shabd. Joginder Kaur and Gobind Sadan children sang a medley of Maharaj Ji’s old shabds, Nam, Allah Hu, and Urdu couplets. Hardip Singh, who prays every hour at the central havan, observed that the whole programme is going on by Maharaj Ji’s grace. Joginder Singh, leader of the Gurdaspur sangat, spoke of Gobind Sadan as a “university of gian [enlightenment]. We all want to go to Sach Kand, but we can find it right here. The vibrations at Darbar Sahib, havan, Jesus’ Place, and mosque are all the same. We are living in Heaven—It is the other name of Gobind Sadan.”

Gurdev Singh, member of Baba Virsa Singh Ji Maharaj Memorial Trust, told the history of Jesus’ Place, from the time when it was part of the dairy farm and Maharaj Ji had the vision of Jesus standing where the manure was thrown. Major General S. V. P. Singh said, “I am not capable of praising such a place where all the prophets are celebrated. My General is Baba Virsa Singh Ji. May we all live by love and help each other, in the spirit of brotherhood.”

Musicians from St. Petersburg, Russia sang a lovely fifteenth century  European Christmas carol and a Ukrainian Christmas song, and then offered the heavenly strains of Tchaikovsky, Vivaldi, and Bokerini as flute  duets. Recitation of the Lord’s Prayer in Hindi by Bipin, in Russian by Ludmila Timofeeva, and in English by Mary Fisher was followed by singing of Gun Gavo, the tribute to Jesus in Punjabi composed by Joginder Kaur, and by a Punjabi cultural programme by Gobind Sadan children in which ecstatic devotees filled the garden dancing to the music. Such joy can only be created by Maharaj Ji Himself.