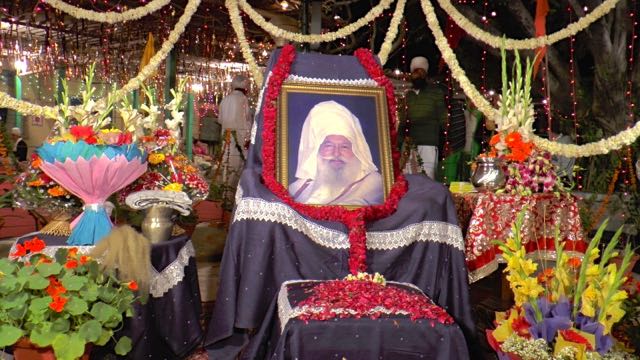 Sangats in many cities and countries celebrated the birthday of Baba Virsa Singh Ji Maharaj with great love in 2015. In India, large celebrations were held in Nissing, Sarawan Bodla, Chandigarh, and Delhi.

The programme at Gobind Sadan in Delhi was conducted from 20 to 22 February. Seven Akhand Paths began on 20th February and were concluded on 22 February. In several of Gobind Sadan’s holy places, nearly life-sized replicas of Maharaj ji in his rocking chair drew great reverence from the sangat. One of these images was placed at Angeetha Sahib during the special havan on 20 February. Dazzling lights and giant colored searchlights swept the area.

Gobind Sadan children offered their praises of Baba Virsa Singh in a special programme on 21 February in the auditorium. Students of Baba Virsa Singh Ji Maharaj Public School recited a summary of his life and some of his major teachings. They also offered kirtan and Punjabi dance in his honour.

On the evening of February 21, excellent classical musicians from Chandigarh—Navtej Singh on voice and harmonium, Veval Sharma on classical flutes, and Gurpreet Singh on tabla—presented musical offerings in Sufi style from a stage set up in Baba Siri Chand’s garden.

Gurdaspur sangat offered their touching kirtan several times, including the programme held on 22 February after Akhand Path Bhog. A good winter rain before the celebrations had washed everything clean. It was a wonderful mix of Maharaj’s old devotees with newcomers in the loving and joyous remembrances.