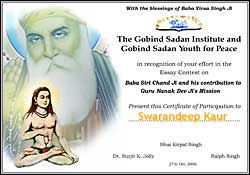 Whenever there is a need for someone to save the earth from evils God always send the one who can rule over and make this earth a wonderful place to live.

Following this path God sent Baba Shri Chand Ji, the elder and loving son of Shri Guru Nanak Dev Ji to preach his teachings to the whole world. He was born in 1494 in Punjab. He was no ordinary son. When he was born, the room filled with light and fragrance. The small curly knots of his hair shone brightly.

He became a yogi from birth and many considered him the incarnation of Lord Shiva Ji. He loved to set in early age.

He was, in a way the first disciple of Shri Guru Nanak Dev Ji and to complement his spiritual education Guruji sent him to Srinagar. He was such a bright student that though he didn’t complete his homework, he always stood first in his class. He defeated the famouns Som Nath Tripathi in Shastra debate. He stayed in Srinagar for 2 ½ years.

He was a great person and did many miracles during his life. One day Baba Lakshmi Chand went on hunting. Babaji (Sri Chand Ji) told him that it was a sin to kill an innocent animal just for fun and he will have to give an account inthe Gods Court. Hearing this, Baba Lakshmi Chand took his entire household, mounted his horse and rode towards Heaven. Having realised of Guru Nanak Dev ji’s lineage Baba Sri Chand ji stretched his arm and took the baby from his brothers lap and raised him as his own son. As his lived an ascetic life Baba Ji fed the baby by his toe. In this way Baba Ji saved the bloodline of Guru Nanak Dev ji.

One day Sangat asked Guru Amar Das Ji, tha how can they show their respect for BabaJi. After a few days when Guru Ji met Baba Ji he bowed before him in deep humility and answered the question of the Sangat. He then recited “Anand Sahib”. Babaji got impressed by Baba Mohan Ji (Guru Amaras Ji’s eldest son) and accepted him as his disciple. He asked Baba Mohan Ji to collect the writing of his father and gave the hand written bani of Guru Nanak Sahib Ji to Baba Mohan Ji for their safe keeping and sen5 him to Goindwal Sahib with Guru Ji.

One day, when Babaji visited Guru Ram Das Ji at Ram Das Pur he noticed Guruji’s long beard and aske dhim that why he was having such a long beard? Guru ji replied that it was to wipe the lotus feet of great men like you and bent forward to demonstrate but Baba ji caught him.

Guru Arjan Dev Ji visited Barath in 1655. There are two sites which still commemorate their meeting. Guru ji shared his goal of compiling Guru Granth Sahib Ji. Baba Ji gave his the Bani he still had and asked him to collect the other portions from Baba Mohan Ji. After Guru Hargobind Ji was released for the Gwalior Fort, he visited Baba Siri Chand Ji and thanked him for influencing Emperor Jahangir. Babaji had told Jahangir that, if he did not release Guru Hargobind Sahib Ji he will have to face a great harm, because Guru Ji were the true successor of Guru Nanak Dev ji’s throne.

Baba Gurditta Ji, the sucessor of patriarch of the Udasi Sempardai, was the son of Guru and the father of Guru Har Rai Ji, became the successor of Baba Siri Chand Ji. As Baba Ji had remained close to the six Gurus, Baba Gurditta Ji always remained close to the ensuing four Gurus. We should not forget that when leaving Anandpur Sahib, Guru Gobind Singh Ji put an Udasi in charge.

One day, Emperor Jahangir invited Babaji to his royal kingdom and sent his royal elephant to carry Babaji. But Babaji put a mysterious question before them.. He asked them that, “The royal elephant can’t even carry my blanket. Then how could you say that he can carry me?” All the countries laughed and thought that Baba ji was joking. But when they mounted the blanket on the elephants back, the poor creature bellowed and fell to its knees. The servant’s bowed in deep respect and humility before Babaji. Baba ji went to the royal court on his own and showed God powers to those whole felt that they occupied high position in the world.

One day Babaji saw a hunter killing a deer. He went to him and revived the deer and taught hunter that all lives and painted by God’s own hands and no one has the right to erase it. Thus, Baba ji taught him respect for all lives.

Babaji did many miracles to teach the sangat. One day he, by his spiritual powers, brought back a dead body to life. Everybody saw it with their eyes and mouths wide open. He then saved his devotees ship from sinking.

Once when Baba ji went to Chambal a boatman taunted that he had powers why he needed a boat to sail across? Hearing this, Baba ji mounted a rock and crossed the river. The boatman felt ashamed.

In 1643, when it was the time for Baba ji to big goodbye to all, he marched towards the jungle on the nearby hill and in twinkling eye disappeared. Nobody ever found his body.

In this way, one more great and spiritual person left the world to be managed by humans. We again need such a loving and true follower to God to make this world a beautiful and peace loving place to live in.