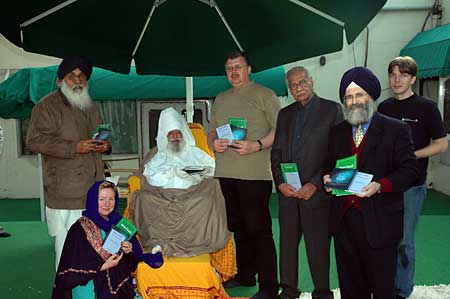 “My dear friends I want to tell you how much the Russian people love Maharaj ji and we are waiting for his return. I do Jaap Sahib and feel the great power of its blessings. We will try to make such a place as Gobind Sadan in Russia where people can remember God day and night. I look forward to a period of peace and happiness. We should leave our enmity and only show love towards one another,” said Andrei Bielianov, Central Minister for Customs, Russian Federation.

Svetlana Smirnova, Deputy Chair, Committee on Federation Affairs and Regional Policy, State Duma, added her heartfelt wishes.”It is a great honor to be here on Guru Gobind Singh’s birthday with Baba Virsa Singh who has taught us that we should love God. Maharaj ji has taught us that there is one God. There are so many people who love Baba Virsa Singh, who are his disciples. We have learned that can read Jaap Sahib in any language and when we do we learn to love God. I want to thank Maharaj ji who has so much love for our country, who has shown how both our countries India and Russia can love each other. I want all people to be happy. Whatever their religion we should all love each other.

In his keynote address, eminent journalist Kuldip Nayar lamented that we are losing those values and have forgotten our heritage, then praised Babaji for “always reminding us of our mother tongue and here in Gobind Sadan we find a great example of how we can overcome our many differences, forget about high and low, and all learn to live together.”

Babaji responded: “Don’t think of Guru Gobind Singh is just for Sikhs. He is for the whole world. Governments have become uncivilized in their rule, and it was to restore civil order that Guru Gobind Singh created Khalsa. This is the need of today. It is especially fitting to celebrate Guru Gobind Singh ji’s birthday with the release of Jaap Sahib in both languages as it embodies the essence of the Guru’s message, ‘Recognize all people as one human race!’ I have traveled the world and have found that there is no such thing as an atheist. I am sharing the same things with all people, but the Russians have adopted it and they are reading Jaap Sahib and finding its great power. I will tell you that one day Russia will become so spiritual that they will surpass the rest world.”

Remarking to the children and principals from the Delhi Sikh Public Schools who had gathered to receive awards for an essay contest on Baba Siri Chand ji, Baba Virsa Singh ji said: “We want to show how much he meditated and followed his father and Guru, Guru Nanak Dev ji’s teachings. He was a great spiritual power. People don’t even realize that Baba Siri Chand ji gave Ramdaspur the name Amritsar. Those who don’t feel he didn’t follow the hukam have not read their history. Let’s all follow the Gurus teachings.”

At a time when the world is experiencing a decline in moral values, it is exciting to note that Russia seems to be leading the way in a wave of spiritual rebirth. In his youth Baba Virsa Singh was shown a vision that Russia would lead the world in spirituality. On his visits Babaji has shared this vision and encouraged the Russian people be firm in their faith. Babaji is much sought after for his visionary powers and his great gift to help both individuals and society overcome conflict and find peace.

The English version of Jaap Sahib, published by Sterling Publishers Ltd., will be distributed throughout their network and the Russian translation is being widely disseminated in Russia and the former Republics.