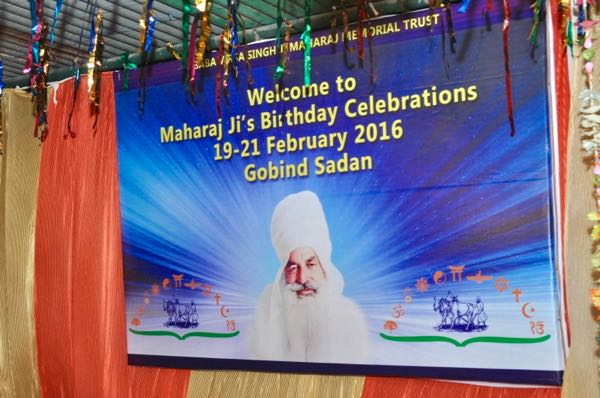 From 19 to 21 February, Gobind Sadan was filled with flowers and lights as the sangat lovingly remembered their great Teacher, Baba Virsa Singh Ji Maharaj, on his birthday. Seven Akhand Paaths were begun on 19 February and concluded on 21 February in his honour. On 20 February, a special havan was held at Angeetha Sahib, ending with poems of praise from sangat members and Prasad.

On 21 February, sangat gathered in the diwan hall for kirtan and talks about Maharaj Ji. Mary Fisher spoke of how Maharaj Ji welcomed everyone with open arms, and that is why Gobind Sadan is called “God’s House without Walls.” She said, “Where is God’s House? It is not just a place in Delhi. It is in our hearts. If God’s House has no walls, there should be no walls in our hearts. To remove the walls in our mind, we must recite Nam.” Kirtan was offered by Hirpal Singh and Gobind Sadan members, Bhai Ravneet Singh Ji jatha, Bibi Sakshi (“Jo Har ka piara, so sabhna da piara”), G. S. Lalli jatha, and Gurdaspur sangat.

Ralph Singh, Maharaj’s first foreign disciple and Founding President of Gobind Sadan USA, remembered his early days with Maharaj since coming to Gobind Sadan in 1971. He said, “I was like an orphan searching the world for my dear father.” He encouraged the whole sangat, especially the old disciples, to share their memories of Maharaj Ji and to work together as a team to spread his mission.

Inspired by Ralph Singh’s talk, 86-year-old Sardar Amar Singh came up to the microphone and spoke about his experiences with Maharaj since 1963, when burfi was 5 rupees per kilo. He was working in the Home Ministry, and as Maharaj ji pointed out, he never used to bow his head before anyone. Amar Singh shared the story of a miracle that happened with him: Maharaj purposely detained him and took him to the hill station Nainital for two days, so that he missed his court hearing in Ludhiana. He had been trying unsuccessfully to win that case for 22 years. When he returned, he got a telegram informing him that his case had been resolved at last, without him, in his favour.