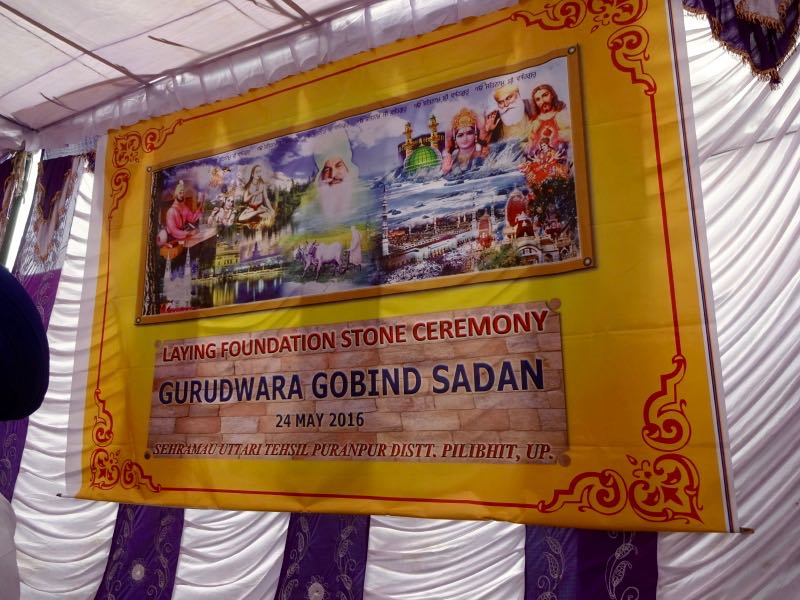 In 1982, Baba Virsa Singh bought a large farm in the midst of India’s largest forest preserve, in Puranpur, Pilibhit District, Uttar Pradesh. The farm bore the old name of “Chaltua,” meaning a place where no one would stay for long, for wild animals such as elephants, tigers, wild boars, snakes, and deer roamed through the area.  But Babaji appointed some dedicated sevadars, initially including Ranbir Singh Khanna (“Vakil Sahib”) to manage all the details, often by walking 9 kilometres from the nearest bus station through the jungle on foot to reach the farm, and eventually Bhupinder Singh, who has devoted his life to the project. With Babaji’s blessings, the farm became very successful and productive, with special features such as solar electricity that runs everything, a sugar cane crusher and gur production unit, and a gobar gas plant for the langar. Now Gobind Sadan’s mission is so well established there that a beautiful gurdwara building is being constructed to house Guru Granth Sahib, according to Maharaj’s hukam. Thousands of people from the surrounding area came to celebrate the foundation laying on 24 May, 2016.

After the Ardas for the conclusion of Akhand Paath, the sangat assembled in a beautiful pandal for a programme beginning with traditional Punjabi thaddi folk music by Bhai Makkan Singh jatha from Malout. Bhai Makkan Singh said, “How blessed is this land where the Name-reciting Mahapurush Baba Virsa Singh came to carry on the mission of the Gurus. When he received Nam, he became King of Kings, honouring all the prophets.” They sang a long and touching song he had written about Maharaj ji, with the refrain, “Dukhian de dukh ke dharu da” (“[You are the] Medicine for the miseries of those who are suffering”).

Gurpreet Singh of Milani explained that Maharaj’s mission has spread to people in 80 countries, and many are now reading Jaap Sahib there. Ragis from Gola sang Guru Arjun Dev’s bani, “Koee bole Ram Ram, koee Khudae, koee sevai gusaia, koee Allahi. (“Some call to Him as Ram, Some call Him Khuddah, Some serve Him as Gosain, Some  as Allah.”) The leader of the jatha praised Guru Granth Sahib as promoting all religions as one, for it contains the inspired hymns of Hindu and Muslim saints, as well as Sikh Gurus. He predicted, “People of all religions will come to this place and bow before Guru Granth Sahib.”

Among the featured speakers were two eminent media figures. Chief Producer of AAj Tak News (India Today Group) Pankaj Tripathi pointed to the banner with Gobind Sadan’s mural of all the prophets and said, “This banner shows the breaking of all boundaries. We people all make our separate holy places, but Baba Virsa Singh’s message is that of universal love.” Anand Dubey, Senior Producer of Zee News (TV channel), said, “Once I was very depressed and was seeking a place where I could find peace. My friend took me to Gobind Sadan, and there I found peace and much more.”

Ajit Pal Singh from Puranpur reminded the sangat of Guru Nanak’s saying, “Na ko Hindu, na ko Mussalman” (“There is no Hindu or Muslim”—i.e., all religions are essentially one). He recited the first stanza of Jaap Sahib and said, “It shows Guru Gobind Singh’s universal vision. God by whatever name is the same. Baba Virsa Singh always told us to sit and read Jaap Sahib. In Guru Granth Sahib there are so many saints from different religions and backgrounds, with no distinction between high or low.”

Bhai Mann Singh, architect and head mason for the gurdwara building, told the sangat that just as a Muslim saint, Mian Mir, was requested to lay the foundation stone for the Golden Temple of Sikhs, an American Christian sevadar, Mary Pat Fisher, would be requested to lay the foundation stone for Gurdwara Gobind Sadan, Pilibhit, to signify the inter-religious nature of Guru Granth Sahib which Gobind Sadan embodies.

Special guests were given murals and DVDs of Gobind Sadan’s programme. Prominent members of the sangat were given saropas, kahis  and taslas for commencing the groundbreaking . After a prayer for blessings on the gurdwara construction, the sangat all joined in with gusto and soon dug a hole for the initial seven bricks. After the bricks were laid and final prayer was said over the foundation, Bhai Mann Singh wrote the date and “Baba Virsa Singh Ji Maharaj” in the wet cement.

Dr. Rai Singh, President of Baba Virsa Singh Ji Maharaj Memorial Trust and newly-appointed President of Shiromani Akali Dal party for Uttar Pradesh and Uttarakhand, also arrived to congratulate the sangat. He said, “Earlier Maharaj Ji had started havan, the sacred fire, at this place to make people of this area happy, healthy, and prosperous. On this auspicious occasion, I pray to Maharaj Ji to bless all of you with happiness and prosperity and fulfill all your wishes with which you have come to this holy place.”

Hundreds of people were given free eye and dental checkups and medicines at a medical camp held at the farm for the occasion, and thousands enjoyed delicious langar prepared at the farm by women of the sangat. Many also visited the havan, where the sacred fire is always burning. Once the gurdwara is completed, havan and reading of the sacred hymns of Guru Granth Sahib will be going on side by side, truly bringing “manggal [joy] in the jungle.”