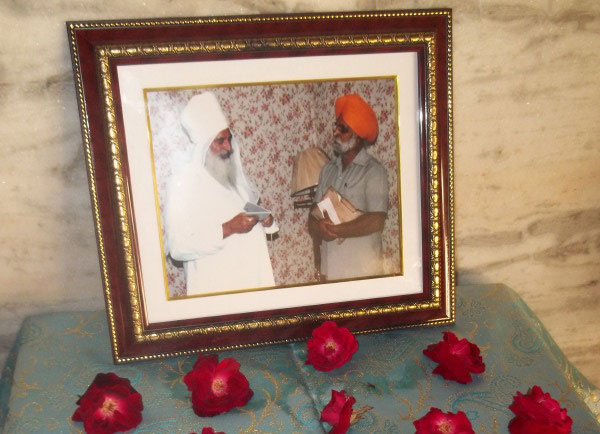 On behalf of the entire sangat of Gobind Sadan and the members of Baba Virsa Singh Ji Maharaj Memorial Trust, i extend my heart felt condolences on the demise of our repected Editor Saheb ji. He was true and devout sevak of Maharaj ji, a noble soul who put in years of dedicated service to extend the mission and cause of Gobind Sadan in India and abroad.

His passing away is a great loss not only to you all but to the entire Gobind Sadan family-who stand with you in this hour of grief.

We pray to Maharaj ji-to grant Editor Saheb peace in his heavenly abode, and strength to the family to bear this great loss.

Editor Sahib, as Holi  Maharajji called him—took the mission from Holy Maharajji to take care of Gobind Sadan USA along with Col.Baweja and Ralph Singhji. Holi Maharajji had clearly given different responsibilities to these 3 persons. They all played a great role in making Gobind Sadan USA a reality during early years. Suresh Rijhwani played a big role later along with Sangat from USA and Canada.

During Holi Maharajji’s visit in late 90’s—the prayer room was packed with some standing. We saw some trucks in the parking lot-so some devotees traveled on the way to work. We were fortunate to have high quality shabad singers—and Holi Maharajji joined in singing.

During the last 6 years—Editor Sahib with his health problems carried out the mission in Central Square,NY with its harsh winters with many feet of snow with the help of Sangat. Even with post 9/11/2001 fire—he along with others helped carry out  the mission and rebuild Gobind Sadan USA with a new building.  Editor Sahib never complained of harsh winter or his health showing great unselfish service to Holi Maharajji’s mission. He was always ready to do the sewa for all. We pray for Editor Sahib in heavan.

When Gurdev Singh asked me to provide a photo of Editor Sahib for our celebration of his Antim Ardas, I searched and searched but could only find photos of Editor Sahib with Baba Virsa Singh Ji Maharaj. At last I gave up trying to find one of him alone, and we used one from approximately 1992 in which he and Maharaj seem to be discussing something Editor Sahib has written for Gobind Sadan’s mission. Actually, this is the way we remember Editor Sahib—not alone, but always in communication with Maharaj. Whether on the other side of the world serving as President of Gobind Sadan USA or physically face to face, Editor Sahib was always by his great Guru’s side.

Maharaj entrusted Editor Sahib with many difficult assignments. He was a courageous speaker, writer, and messenger on behalf of Maharaj’s mission of presenting the truth of religion, as brought to us by all prophets and particularly the Sikh Gurus. He was Head Granthi of Gobind Sadan USA, and was blessed by Maharaj to give Nam to people as well as to offer spiritual counsel by taking hukam. He worked hard to convey Maharaj’s points in book form, and to get them published and distributed. His research brought forth many important facts by which written Sikh history could be corrected. Along with others in the American sangat, he remained staunchly faithful after the arson that destroyed the original Gurdwara building, leaving only Guru Granth Sahib, its paliki, Dasam Granth and pictures of the Gurus intact.

Whatever assignment Editor Sahib was given, he carried it out with full dedication and dignity.

Like all of Maharaj’s great sevadars, Editor Sahib was a unique and irreplaceable personality. His memory will continue to inspire us and we pray that Maharaj will always keep him close by, as his mission continues across the millennia.

The past 4 days were devoted to paying tribute to Editor Sahib, Gurbachan Singh ji, who devoted more than 5 decades to serving the Sikh Panth and almost 40 in service to Maharaj ji. He impact was so great and seva so appreciated that ceremonies were held in Gobind Sadan as well as GSUSA.
Tributes will be posted on the site – please forward them to info@gobindsadan.org

The article in the local paper read:

Sardar Gurbachan Singh – President/Chairman of Gobind Sadan USA (interfaith center), originally from Tarn Taran, India, passed away peacefully on Monday with family by his side.

Mr. Gurbachan Singh was born in Shabpur, India to Sardar Amar Singh and Sardarni Satwant Kaur. He grew up in Punjab, India and earned two Master’s Degrees in Punjabi and English. He began his career in public relations and subsequently became the Chief Editor of the newspaper, Akali Patrika, and Editor of Ajit. In 1988 he followed the hukam (order) of Baba Virsa Singh Ji to emigrate to Central Square, NY, in order to further the mission of Gobind Sadan, founded by Baba Virsa Singh Ji in USA in 1986, as an interfaith center. Gobind Sadan, God’s House Without Walls, promotes the harmony of all religions and cultures. He selflessly devoted himself to this mission his entire life as per the hukam of Baba Virsa Singh Ji.

People came from near and far to pay their final respects to Editor Sahib ji and console the family on Wednesday evening. Thursday morning, his body was taken on a final visit to the main prayers sites at Gobind Sadan, USA. Then a line of more than 30 cars filled with loyal devotees escorted his body to the cremation ceremony.

The Akhand Path was started immediately following, and by the bhog, Gobind Sadan, USA’s hall was filled. As a fitting tribute, his family led most of the kirtan with shabads by his daughter Arvinder, her husband Amit and the Dhamoon family, by his grand-daughters Upneet and Puneet, with a final shabad by Joginder Kaur. Brief tributes were offered by Jaspal Singh Kalra, Sajjan Singh, and Ralph Singh, but once again, Arvinder Kaur led by reading a beautiful tribute to her father, recalling his virtues, as father, scholar, and most importantly sewak of Maharaj ji.

Arvinder, Your father was a kind and gentle man and will be missed by many. Your family is in my prayers. May God bless you and keep you close in your time of sorrow.

Dear Manjit, Arvinder, Gurinder and all of your darling grandbabies… Our hearts are heavy at your loss. Gurbachan was a wonderful man, husband, father and neighbor, of whom we only have fond memories. We are thankful for the friendship of your entire family over the years and we will miss our visits with Gurbachan, especially around the garden, as will our grandchildren. May your happy memories help to ease your grief and suffering in the days to come. With deep sympathy and big hugs,
Tommy and Brenda Dann

Dear Manjit Auntie ji and Dhamoon family,My thoughts and prayers are with your family. May God give you the strength to cope with your loss. I have so many great memories from my many visits to Gobind Sadan, S.Gurbachan Singh was a great man, accomplished scholar and a very gregarious human being. I always enjoyed his company and learned so much from him. He will be missed by everyone he knew. Guru bal bakshe.
Gurdeep Singh

Tributes from the Sangat

Editor Sahib was a great soul indeed. His dedication to Maharaj ji and his mission was an example in itself. He was a Knowledge Bank. It is a great loss for the Gobind Sadsn Sangat. May his soul rest in Maharaj Ji’s lotus feet (more to come).
Jaspal Singh Kalra

Editor Sahib was such a staunch sevadar of Maharaj for so many years, in many capacities. He has been a great leader of the US sangat, through many kinds of difficulties, including the arson. May Maharaj bless and keep him always near (more to come).
Mary Pat Fisher

He proved the pen is mightier than the sword – standing up to corruption, to the senseless killing that rocked his beloved Punjab, and personally put his life in danger – when he was on the blacklist – taking Maharaj ji’s urgent message to Bhai Jarnail Singh to vacate the Akal Takhat lest a great disaster befall the Sikh community.

His scholarship was equally remarkable. Digging deeper, he always uncovered buried treasures from Sikh history, and enjoyed shaking up the Sikh establishment with the controversy they might create. His treatises on Chandi di Vaar, and on havan were wonderful. I was with Maharaj ji when Editor Sahib had found the signature of Guru Hargobind Sahib, with “ek onkar satnam siri” – Maharaj ji’s happiness was boundless.

Few embody the words – Brithi na jai, jan ki ardas
For he was one of Maharaj ji’s chosen few, blessed for his commitment, with Maharaj ji’s power to pray for the sangat and expand the mission through the power of Nam. He always said, the mission is spread through miracles.

For Editor Sahib ji there was nothing more important than hukam. And for one who was such a dedicated husband, doting father and grandfather, this was at times extremely difficult. But watching his family flourish, and continue his legacy, was his greatest source of pride.

I first met Editor Sahib ji when Maharaj ji would send me to preach in Punjab in the early 70’s. Giani Shaddi Singh ji and Amar Singh Dosanjh would invite me to the Akali Patrika offices for weekly interviews. Later we stood together during the All India Akali Conference in Ludhiana in 1978.

Little did I know that Maharaj ji would bless me with the sewa to sponsor this Panth Rattan to bring his prayers and knowledge to Gobind Sadan, USA.

He helped me prepare the early pamphlet for the first North American Assisi in Wichita, and accompanied me to that conference and several of the Sikh youth camps where he developed a Punjabi correspondence course.

While he loved nature, I’m not sure he was ready to welcome the welcome the blizzard that dumped 12’ of snow around the area. Yet he waded through several feet of snow to do parkash daily. I will always remember him proudly sitting on his tractor plowing the driveway. Despite being in the countryside, his love of nature and love of writing kept him constantly busy. And he was often in demand for speaking, Akhand Paths, and weddings throughout the region.

During the arson, he was a pillar of strength, putting forth Maharaj ji message to whomever would ask, both here and around the world.

Combined with his prayers and spiritual life, his wonderful laugh and sense of humor charged the atmosphere around Gobind Sadan, USA.

While we will all miss him greatly, the very air, and ground in the gardens will miss his laugh and tender touch.