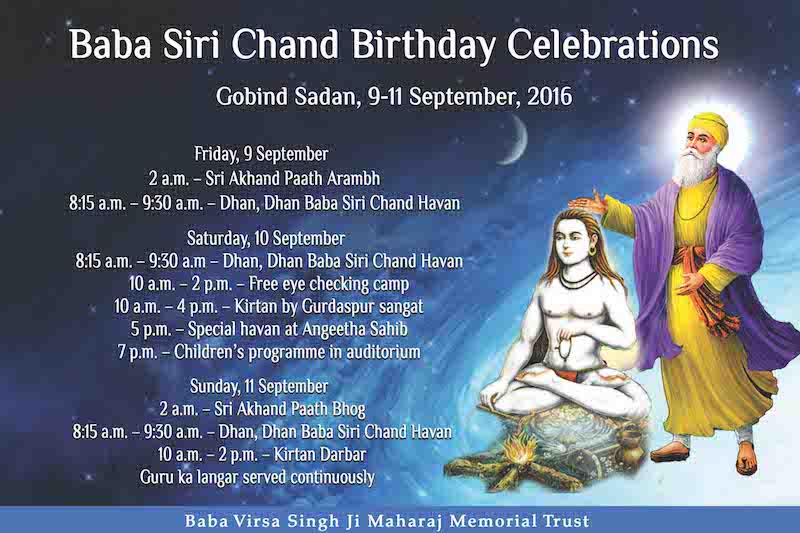 A very large congregation of devotees converged on Gobind Sadan from 9 to 11 September 2016 to celebrate the birthday of their revered Baba Siri Chand Ji. The crowd was so large that many people slept on mats under the stars at night. Everyone was in a very happy mood, and the gathering was unusually peaceful, with lovely arrangements of every sort and beautiful weather. Luckily for those sleeping outside, this was the first time in memory that there was no rain during the Baba Siri Chand birthday celebrations. Langar was especially delicious and well-organized.

Many people were in attendance at 2 a.m. on September 9th as 7 Akhand Paaths started in Darbar Sahib. Sevadars from many areas were busy in seva during the day, such as cleaning, cooking, and cutting 11 large trolleys of firewood for the langar from Gobind Sadan’s jungles and edges of fields. They were cutting saplings of calcium trees which reseed themselves and grow rapidly and abundantly at Gobind Sadan, where greenery of all kinds is especially lush this year after good monsoon rains.

On Saturday, September 10th, doctors from Sai Retina Foundation brought their well-equipped bus for free eye checking. Some 90 people took advantage of the free service, and received professional diagnosis, advice, glasses, and treatment programmes for vision problems such as cataracts. Dr. Krishna Vir from Shiv Sadan also gave free medical service to the sangat for two days. Gurdaspur sangat sang praises of Baba Siri Chand throughout the day. In the evening,  children from Baba Virsa Singh Ji Maharaj Public School presented a programme of speeches, poems, songs, dances and skits in memory of Baba Siri Chand, including recitations from memory by Hindi-speaking children of up to 2 pages of text in Punjabi. The children’s programme was followed by a special havan at Angeetha Sahib, with Gurdaspur sangat members specially dressed in royal blue in honour of the occasion. By late evening, as the special havan ended, everyone was dancing.

Akhand Paath Bhog was held early on Sunday morning, September 11th, followed by well-attended talks and kirtan in the diwan hall. Gurdaspur sangat brought 4 jathas of ragis under the leadership of their jathedar Joginder Singh, who also spoke about Baba Siri Chand. Gurdev Singh shared important points about the life and work of Baba Siri Chand. A special guest, Sardar Sucha Singh Langah, Ex-Agricultural Minister of Punjab and present leader of Shiromani Akali Dal, gave a long and appreciative talk about Baba Siri Chand. The large crowd was fed very delicious food in the langar throughout the celebrations, so everyone left happy, inspired, and well-fed.