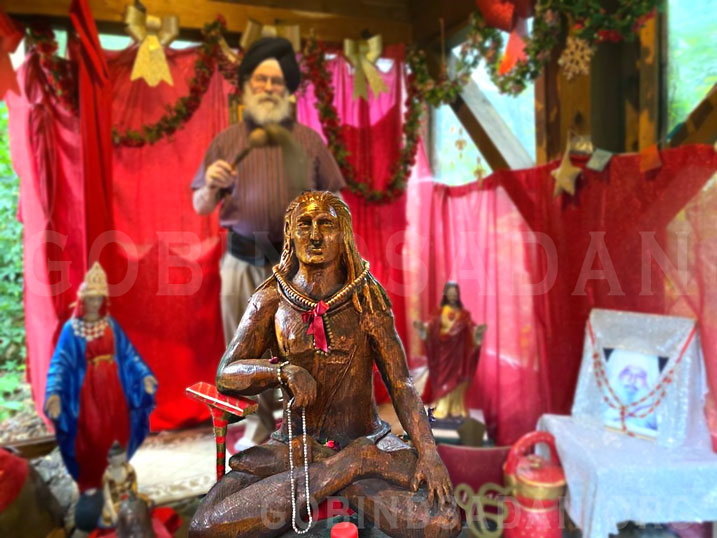 Baba Siri Chand’s birthday 2020 fell on August 27th, in the midst of the COVID-19 pandemic, so Gobind Sadan couldn’t celebrate it in a big way on its Delhi campus. Instead, the sangat were encouraged to celebrate at home, in their own ways, and share their photos. While countless celebrations went on throughout India, we thought we’d feature some of the celebrations in homes around the world.

The most powerful photo is from Baba Siri Chand ji’s shrine in Elbridge, New York, at the home of Ralph Singh and Joginder Kaur, which Maharaj ji Himself had chosen and which served as His main residence during his 5 visits to the U.S.

Ralph explains, “We celebrate every year. Gatherings have ranged from a dozen to a hundred. This year, due to covid, it was only our family – reciting Jaap Sahib, singing Baba Siri Chand ji’s praises, and Aarta. But He welcomes and blesses people throughout the year – heals them – counsels them – blesses them with children. Joginder prepares His food as directed by Maharaj ji and makes the offerings in our sacred fire.

“We had always felt His presence, but Baba Siri Chand ji had appeared to Chetan walking in our back yard. Maharaj ji confirmed and said we should build a shrine as a proper place for Baba Siri Chand ji. ‘He wants His privacy,’ Maharaj ji instructed, so we constructed the shrine behind our barn under a huge hundred-year-old willow tree. I showed Maharaj ji a variety of pictures and Maharaj ji chose the balak (youthful) form. Then a sculptor appeared at a local exhibition. Maharaj blessed the man saying He would build Himself as he wants. He was carved from a single tree trunk of special catalpa wood, complete with sandals, varagan, carmandal, and even a fire at His feet. Huge stones from a nearby quarry were arranged for a proper platform, a pond and falls for natural beauty were constructed and covered with a hand-made roof. The shrine was later enclosed in the winter.”

In contrast with this magical permanent place for Baba Siri Chand, many people honoured Him by making temporary havans outside their homes. In Sweden, a group of devotees gathered at Viveca’s home to do havan and recite Jaap Sahib together, as they had learned very well on their frequent trips to Gobind Sadan. Susanna Mattson wrote, “The weather forecast predicted rain, but of course the sky was clear tonight! Thank you for giving us the opportunity to celebrate here in our own country. Though far apart in the physical world, all Maharaj’s people are always so close in our hearts.”

In Melbourne, Australia, 10-year-old Angad washed the patio floor before he and his father Harry set up havan there in a fat metal pot, read Jaap Sahib along with his grandmother, and offered khir and mal puras to Baba Siri Chand. They were specially blessed with a rainbow that day. Harry wrote, “It is a great feeling when you believe Maharaj holds your hand and helps in doing havan. The plan was to start havan at 6 to 8. Ended up being rough day till 7:30 p.m. Trees fell on roads, super cold and windy and rainy. We waited and suddenly weather calmed down completely and we started at 8:15 p.m. and guess what? 3 minutes before finishing around 10, it started raining again. What else can I ask Baba Shri Chand Ji? Only thing to ask is, ‘Maharaj, make us one with you for ever. Make us love you and your creation 24/7 without any demand.’ May Maharaj bless us so we do Nam with no self-interest, life becomes effortless, and love becomes our food.”

Bawa, who lives near Vancouver, Canada, usually sponsors Akhand Paath in the local gurdwara for Baba Siri Chand’s birthday, but could not this year, because of corona virus. So he did havan at home in a metal container while reading Jaap Sahib and got an article about Baba Siri Chand published in The Voice Weekly, an Indo-Canadian newspaper.

A most extraordinary havan was created for Baba Siri Chand’s birthday by Baba Inder Singh’s family in Texas, USA. They put together a fantasy assemblage of balloons and placed wooden animal carvings. They made a gaddi for Baba Siri Chand in it, and conducted havan, under a sky filled with dramatic clouds.

In Mexico, Seva Singh (an ardent devotee of Baba Siri Chand) and friends got together to do havan in his special havan kund, as they do every month. He wrote, “Thank you for the opportunity of being part of Gobind Sadan’s celebration of Baba Siri Chand’s birthday. It is a great honor. It was a truly blessed celebration!”

Gurdwara Nanak Sagar in Sector 39, Chandigarh, has a permanent havan, so sangat gathered there to celebrate Baba Siri Chand’s birthday by reciting Jaap Sahib and other hymns around the havan. They had turned the gurdwara into a fairyland of tiny lights in honour of Baba Siri Chand, who had spent some time in that place long ago, making it holy forever.

Many people live in apartments and are not able to do havan therein, so many devotees of Gobind Sadan made special altars in honour of Baba Siri Chand’s birthday and read Jaap Sahib there. Among them are Jaspreet Virk in New Delhi, Ashish and Harima in Acton, Massachusetts, USA, Charanjeet Dhaliwal and his family in Gold Coast, Australia, and Manjit and Kamaljeet in Canada. Many of them made special food offerings for Baba Siri Chand for the occasion. Amarjot and Parneet in Russia also read Jaap Sahib, as they had learned to do so well during the many months they spent doing seva in Gobind Sadan. Devotees in Kazakhstan will soon celebrate in their own way.

Jacek in Poland had a unique idea: He sang and meditated in his sauna at 4 a.m. in sweet remembrance of Baba Siri Chand.

Sisters Supreet and Sonali and their children got together in the USA for Baba Siri Chand’s birthday. Supreet writes, “We celebrated it in our own humble but loving way here in Walnut Creek, California. We started the day by doing sewa of cleaning up Baba ji’s space, and ironing fresh clothes for him and decorating (with flowers) his space. Then I hand stitched a Rumala for Guru Granth Sahib ji with fabric and lace that I had bought from a fabric store. All of this was done with constant ‘Dhan Dhan Baba Sri Chand Sahib’ Jaap. Then Gagan, Angad and I went to Sonali’s place. Sonali and the kids had decorated Baba ji’s room with beautiful flowers from their garden and many tea lights. We did Jaap Sahib and Jaap. Afterwards we came back home and offered a homemade berry cake to Baba Sri Chand ji. In the evening after our daily aarti, we sang Baba Sri Chand ji’s Aarta. It was a beautiful, peaceful and happy day.”

The Gobind Sadan, USA sangat celebrated with a virtual Akhand Path and kirtan which has drawn devotees from around the world https://www.gobindsadan.org/gs-usa-program/

Below are some of the photos that Gobind Sadan devotees from many countries sent to share with our global family. May others be inspired to celebrate holy days in their own homes as well.