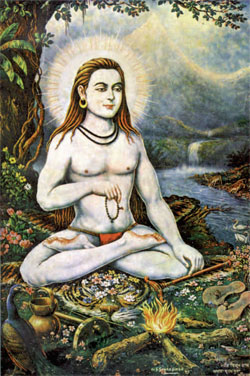 Baba Siri Chand ji, the great mystic saint and elder son of Guru Nanak Dev ji, is one of India’s greatest yet also one of its least known heroes. In a well-documented period, his life spanned the 149 years from1494 to 1643. The Emperor Jahangir once asked his Fakir, Syed Mia Mir, “As I am Emperor over all of India, who is the greatest spiritual king among you all?” Mia Mir replied, “Guru Nanak’s elder son, King of all Fakirs.” The census conducted at the time of Shah Jahan showed that Baba Siri Chand ji had the greatest following throughout his entire kingdom.

While the Guru’s gaddi was passed to Guru Angad Dev ji, Baba Siri Chand ji accepted the responsibility from his father and Guru of uniting the various spiritual schools of India. He was revered by Muslims and Hindus, ascetics and householders alike. He carried Guru Nanak Dev ji’s message throughout the Subcontinent from Sindh to Srinagar and from Kandhar to Kabul.

Baba ji was held in great esteem by the ensuing 5 Sikh Gurus. Two of them even offered their eldest sons in spiritual service. Guru Amar Das ji offered Baba Mohan ji, who is best known as the custodian of the Guru’s Pothis (hand-written verses) from which Guru Arjun Dev ji compiled Guru Granth Sahib ji. And most notably, Guru Hargobind Sahib offered Baba Gurditta, who became Babaji’s successor and is regarded as the Patriarch of the Udasi Semperdai. Interestingly enough, he was not just the son of Guru Hargobind Sahib, but the father of Guru Har Rai ji, the grandfather of Guru Harkrishan ji, the older brother of Guru Tegh Bahadur ji and the Uncle of Guru Gobind Singh ji. Peace followed Babaji wherever he went and through miracles and teachings he cooled the fires of religious conflict so prevalent in the world of his time.