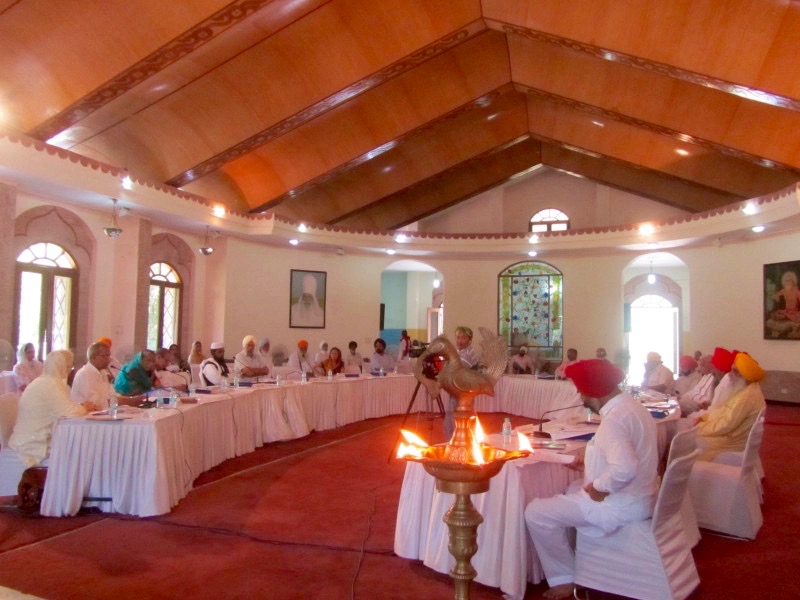 To honour the occasion of Baba Siri Chand’s birthday, 23 September, 2015, an excellent seminar was held by the Gobind Sadan Institute for Advanced Studies in Comparative Religion, under the auspices of Baba Virsa Singh Ji Maharaj Memorial Trust, on “The Non-Sectarian Nature of Indian Saints.” India is a multi-faith country, so the lives of its saints of all religions were studied to gain insights into how they related to people of other faiths.

Sri Ashok Singhal, Chief Patron of Hindu Vishwa Parishad, the main international Hindu organization, and a patron of Baba Virsa Singh Ji Maharaj Memorial Trust, was the Chief Guest. He credited Baba Virsa Singh with inspiring the VHP to respect all religions and pointed out that the VHP begins all its meetings with a mantra that means “All are one.” VHP Joint General Secretary Sri Balkrishan Naik pointed out that Swami Vivekananda asserted that there is one dharma, one Source of Light. The different religions are like rays from that Light; they become less distinct the closer one comes to the Light itself.

Other speakers included Father Bento Rodrigues, Manager of Father Agnel School and Ashram, who said, “Religions may divide, while spirituality ever unites. The body of religion is a way to spirituality.” He described the altruistic lives of many Catholic saints of India. Dr. Vijaya Ramaswamy, Chairperson of School of Social Sciences, Jawaharlal Nehru University, noted that “Saints of any religion reach where there is no caste, gender, or religion.” She quoted Kabir’s experience in which “you are lost in that universal Self—When you enter the Ocean, you are dissolved.”  She spoke in particular of the saint Ramana Maharshi, a renunciate who was not affiliated with any order, and to whom Hindus, Muslims, and Zoroastrians came from all over the world, especially saintly women. Gurdev Singh, member of Baba Virsa Singh Memorial Trust, noted that the village where Gobind Sadan has been built is an ancient place of saints, including Sufis who used to do their Namaz here.

Dr. Surjit Kaur Jolly, Secretary of the Gobind Sadan Institute and Principal of SPM College of Delhi University, described the life of Baba Siri Chand, who went to the holy places of all religions to carry the mission of his father, Guru Nanak. Swami Dharamand, coordinator of Adhyatma Sadhana Kendra, spoke of the Jain practice of saluting saints of all religions, not just Jain saints. Lama Doboom Tulku, Founder of World Buddhist Culture Trust, said “I came here today to pay homage to Baba Virsa Singh Ji. The persons who have become known as founders of religions did not have the idea of sectarianism. Their mission was not to create a sect or a religion as such. Their intention was to show people the right path.” He told the audience about Atisha Dipankar, a great reformist Indian Buddhist teacher who was also highly influential in shaping Tibetan Buddhism—“His is the message of unity.”

Gobind Sadan’s imam Jabar Ali explained, “I do not only Namaz but also havan. May all recognize that love is the essence of religion. We want to show the example of Gobind Sadan to everyone.” R. S. Kalha, Former Secretary of External Affairs and Former Member of the National Human Rights Commission, said, “What is Gobind Sadan? Is it a gurdwara? Is it a mosque? Is it a church? Is it a mandir? All these things are here, so what is it? It is God’s House without walls.” Dr. Veena Sharma, Former Director of Doordarshan Radio in Swahili, said, “When I came here to Gobind Sadan, I found that one can reach the same place through any manifestation of the divine. These saints exemplify the saying that Truth is One, but expressed in different ways by the saints who have realized it. The differences are so beautiful. That Consciousness is limitless, so it can express itself in so many ways.”

Dr. Syed M. Hussain, an eminent kidney specialist, said, “We should take the message of Maharaj of love and seva everywhere. Seva has no sectarian religion.” In his concluding remarks, Dr. Rai Singh, President of Baba Virsa Singh Ji Maharaj Memorial Trust, explained, “Although Maharaj Ji never went to school, he imbibed the ideology of all religions, and that is what you find at Gobind Sadan. Nothing in Guru Granth Sahib is contrary to the views of any religion. The House of God without walls means there are no boundaries, no distinctions. At Gobind Sadan we celebrate all birthdays, all holy days with the same enthusiasm. Babaji presented a unique example for the whole world. Everyone who is a devotee of Baba Virsa Singh should take a pledge to follow this mission.”