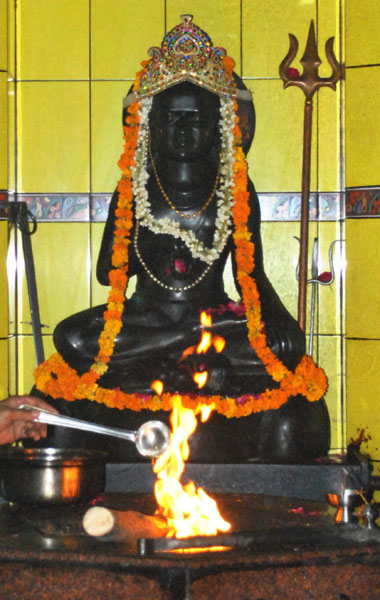 It began with a special havan at Angeetha Sahib on the 4th, which was the actual birthday of Baba Siri Chand this year, according to lunar calendar calculations. On the 5th at 2 a.m., 7 Akhand Paths began, creating an especially sacred atmosphere in Darbar Sahib throughout the celebrations. On the 6th, the sangat made a huge Nagar Kirtan procession on foot to 18 of Gobind Sadan’s holy places. It began with Ardas before Sri Guru Granth Sahib, proceeded to Angeetha Sahib, where Dr. Rai Singh and Hardip Singh gave brief speeches about Baba Siri Chand and Gobind Sadan’s mission. Dandiyas from Madhya Pradesh did their traditional dances with sticks, and then the procession continued to Jesus’ Place, the Sh’ma Place of Jewish worship, mosque, all 7 temples on the hillside, Gurdwara Sarbat Sangat’s havan, Darbar Sahib, and Mataji’s temple, Buddha and Mahavir’s meditation pavilion, and then returned to the central havan for a final Ardas. Bhagat Ji led singing of “Dhan Dhan Baba Siri Chand Sahib” the whole way. Afterward, Nabhe diya Bibiyan offered their powerful kirtan with traditional Punabi instruments.