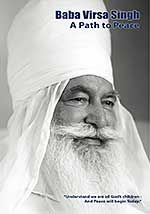 A Path to Peace
“Keep growing in love for your Master. Do not look to this side or that or even at the path ahead, because people will always be criticizing you.”