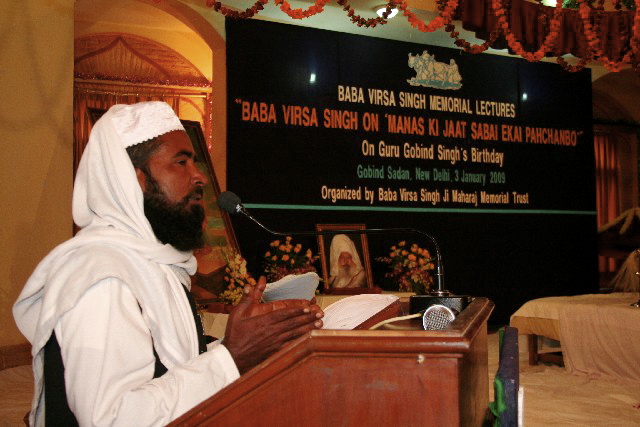 Baba Virsa Singh always celebrated his beloved Guru Gobind Singh’s birthday with great respect and joy. One year after Babaji left his physical body, his devotees under the direction of the Baba Virsa Singh Ji Maharaj Memorial Trust carried on this tradition by arranging a three-day celebration of Guru Gobind Singh’s birthday according to the traditional calendar dates, January 1 to 3, 2009. Seven Akhand Paths were begun on 1 January. After the bhog on 3 January, a programme of kirtan, poetry, and Baba Virsa Singh Memorial lectures on the subject “Baba Virsa Singh on ‘Manas ki jaat sabai ekai pahchanbo’” was held in Gobind Sadan’s lovely auditorium.

Welcoming remarks were made by Churchill Chadha,Treasurer of the Trust. He suggested an English play on the word “Gobind:” “Gobind Sadan’s mission is to ‘Go’ and ‘bind’ people to the mission of Guru Nanak. As Maharaj taught us, we keep on celebrating all holy days with great dhoom dham. ‘Manas ki jaat’—recognizing all humanity as one– will occur when all holy days are celebrated in all holy places, as they are here. Just to speak from a stage doesn’t mean anything. Nothing will happen until this programme is implemented. Maharaj ji taught us how much power there is in Guru Granth Sahib. In Gobind Sadan USA there was a fire set by misguided youth, but nothing happened to the Guru Granth Sahib or the picture of Guru Gobind Singh.”

Sardar Jagtar Singh Jinghiana, in charge of Sikh Mission, SGPC, recounted the story of how after 1000 years of slavery and oppression, Guru Gobind Singh brought ‘Manas ki jaat.’ “He gave the Khalsa that amrit that would make them falcons. Now this message has reached Russia. Where they were formerly atheists, Baba Virsa Singh spoke in Parliament, and preached about the equality of humankind.” Recalling the courageous efforts of the Udasis to preserve Sikh traditions during dangerous times, he concluded, “May you become good people and keep this firmly in mind: ‘In the name of Guru Nanak, may everyone be in high spirits, and by Thy will, may everyone prosper.”

Ludmila Timofeeva, a long-time Russian sevadar from the International Association for Peace through Culture, told the audience that “Gobind Sadan has long been a home for people from Russia, England, America, and other countries. We see that people in Gobind Sadan are taught about One God, and we see One God in the people’s practical lives, because we see how the various prophets are all considered very important in Gobind Sadan. Guru Gobind Singh speaks of this in Dasam Granth, and Baba Virsa Singh told about this nonsectarian message. People from all countries come and then carry this message to other lands. Maharaj Ji gave a copy of Dasam Granth to the Institute for Oriental Studies in Moscow, and now it is being translated there. Baba Virsa Singh has awakened the light in our heart, the light of love, and that Light will spread to the whole world.”

Mary Pat Fisher, author of college textbooks on the world’s religions and manager of various activities at Gobind Sadan, spoke of the special affection that Baba Virsa Singh had for hardworking physical labourers. “Whenever there was something special to be distributed, he always called the malis and mistris first, and always spoke to them with great respect and love.” She quoted from Baba Virsa Singh’s speeches about Guru Gobind Singh: “He taught that in the family of God there is no caste, no high or low, no sect. The only caste is that of humanity. Today who works for the sake of other religious communities? Everyone is looking after his own community. But Guru Gobind Singh did not erect any boundaries. He never said, ‘This person is Sikh, that one is Hindu, that one is Muslim.’ Instead, he said, ‘Recognize all human beings as one. You are all sisters and brothers.’”

Gobind Sadan’s Imam Jabar Ali proclaimed, “Baba Virsa Singh shows us that Muslims, Hindus, and Sikhs are truly one. This love for each other was created by Baba Virsa Singh. May it live forever. This is our Guru’s message.”

Ralph Singh, founding President of Gobind Sadan USA, said, “Where does this vision of ‘Manas ki jaat’ come from? We all think, ‘I’m best.’ To remove such thinking, Maharaj gives everyone Nam and Jaap Sahib. Only through repetition of Nam are our minds cleared. When we realize that we are all part of one community—that there is no outsider—we feel responsible for all people. God has given us the greatest gift of Baba Virsa Singh so that we can understand that Jesus, Ram, Mohammed are real—because we have seen these kinds of miracles in Gobind Sadan. Maharaj’s message to us is that ‘I will work even more through you.’ It is only beginning. Sarawan Wala’s voice is spreading everywhere.”

Roshan Lal, Vice President of Arya Samaj and State Minister in Haryana, said, “I want to congratulate you on the topic of this gathering. We all inject our children with our own ideas. There are 700 crores of people in the world. We should spread Babaji’s message to them all.”

Dr. Surjit Kaur Jolly, Principal of SPM College of Delhi University, expressed the wish that Baba Virsa Singh’s message should spread to all people of the world, for “Our children, our society must change.”

Rai Singh, President of the Baba Virsa Singh Maharaj Memorial Trust, concluded, “Baba Virsa Singh was a living, speaking Guru Granth Sahib. He explained it in great depth, but in such simple language that any child could understand. He was always quoting and explaining such passages as ‘Manas ki jaat,’ ‘Aval Allah Nur upayah,’ ‘Na ko bairi na he begana’—‘Let all humanity be recognized as one,’ ‘God put His Light in everyone,’ and ‘No one is an enemy, no one is a stranger.’ He gave us Jaap Sahib to read, and it doesn’t have the name of any deity or prophet. It is the scripture of God only. Babaji gavehis shakti to devotees assigned to pray at the havan and at Jesus’ Place. No one can stop his power.”