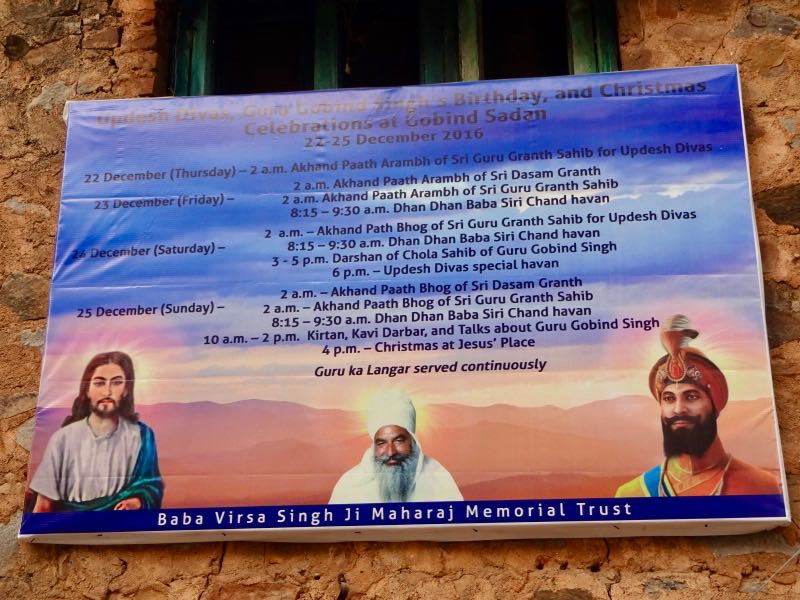 Despite the winter cold, many sangat came to Gobind Sadan for three days of celebrations of the day of Baba Virsa Singh’s passing (“Updesh Divas”), Guru Gobind Singh’s 350th birthday, and Christmas, from 23 to 25 December 2016. There were three Akhand Paaths: one for Updesh Divas, one for Guru Gobind Singh’s birthday, and a special Akhand Paath of Dasam Granth carried on by a team of paathis from Baba Bidhi Chand’s samparda in village Sur Singh near Tarn Tarn, Punjab who can read the difficult scripture and perform the Akhand Paath with all proper rites.

On 24 December there was a special havan in honour of Updesh Divas, followed by extremely touching darshan of Guru Gobind Singh’s Chola Sahib, which had been gifted to Baba Virsa Singh by the Pir of Bareilly, along with the chola of one of Guru Gobind Singh’s martyred sons. These precious relics are rarely shown to the public, and Maharaj Ji did not allow anyone to photograph them, out of deep respect. They were reverently placed on the stage in the auditorium, surrounded by an honour guard, and as the sangat filed silently by, all were deeply moved.

On 25th December, those who spoke about Guru Gobind Singh included Singh Sahib Giani Partap Singh.  the former Head Granthi of Nanded Sahib, the historical gurdwara where Guru Gobind Singh left his physical body. He said, “I have known Baba Virsa Singh JI for so many years, and I have received great blessings from him. He loved me very much. He was always speaking of Guru Gobind Singh’s blessings and his Jaap Sahib. Gobind Sadan is a place where Jaap Sahib is always being recited. If you read one Jaap Sahib with love, it is equal to doing parakamba (circumambulation) of the whole Creation and offering it to God. That is why Gobind Sadan is such a blessed place.”

Dr. Veena Aggarwal from Delhi University, who did her PhD and post-doctoral work on Guru Gobind Singh, his life, and Dasam Granth, spoke of Guru Gobind Singh’s life. She had been interested in the Guru ever since childhood when she used to hear his words being read from the Machhiwara Gurdwara near her house.

Gurdev Singh, member of Baba Virsa Singh JI Maharaj Memorial Trust, told about the banners that had been placed in the dera with Maharaj ji’s words about Dasam Granth, Guru Granth Sahib, Jaap Sahib, and Guru Gobind Singh. About the Guru, Maharaj said:
“Whenever there is fear, casteism, self-interest, crime, and corruption rampant in the world, a great being like Guru Gobind Singh takes birth to give strength to the people and empower justice. He taught that in the family of God there is no caste, no high or low, no sect. The only caste is that of humanity. He taught that God’s strength and enlightenment lie within one’s own being. Guru Gobind Singh and the power of God, the existence of God, are the same. One who follows him can never create a small fortress out of religion.”

For Christmas, Jesus’ Place was filled with lights, divas, and candles, and many people brought garlands to lovingly place on Jesus. The programme included offerings by small children from Gobind Sadan’s Baba Virsa Singh Ji Maharaj Public School, a talk by Ludmila Timofeeva of Russia about the icon of Mother Mary that had often saved Russia from invasion, and a touching song about Jesus written by Bhagat Ji before he passed on, sung by his brother Suhel Singh. Imam Jabar Ali of Gobind Sadan’s mosque spoke of love and urged the sangat to help “show Gobind Sadan’s model to every corner of the world.” Rev. Bhaskar of St. John’s Church in Mehrauli said, “These great Powers never show their greatness, never call themselves great. From their lives we learn humility, love for others, and equality.” Joginder Singh, Jathedar of the Gurdaspur sangat said, “It is a reality that Gobind Sadan has become a great centre for the teaching of peace. People should spend a month here to learn peace.” Dr. Rai Singh, President of Baba Virsa Singh Ji Maharaj Memorial Trust, concluded the programme by saying, “There are lots of books and lectures, but the practical thing is here. We respect Baba Virsa Singh so much for setting this example. The Kingdom of Heaven is here.”