An interview with Major Sahib 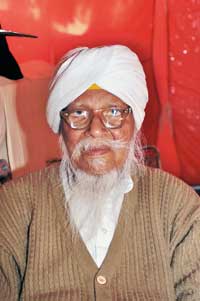 I was always intereted in studying. I was born in Ludhiana district in a poor family. There was no school in my village. This was during the British period. I was born on 15 Dec 1915. The closest school was 2 miles away in Siri village. I passed the Primary grade from there. In those days we never had bags full of books. I had only one primer & one slate. I knew the entire primer by heart. Sometimes the children would ask me to recite a particular part of the primer but I would tell them that I will start from the beginning. Since I knew the entire thing by heart I would recite the entire book from beginning to end. Then in 2nd grade I had 2 books. Slowly I passed the 4th grade. This school was till 4th only. 5 miles from my village was another village Gill which had a school upto grade 8. I passed the 8th grade from this school. 9th onwards was High School. High Schools were only in Ludhiana district or other places very far away. So then I shifted to Muktsar & studied there till 10th. Since I did not know anyone at Muktsar a teacher in the school kept me at his home & that is how I could study till 10th.

After giving my exams for the 10th grade in March 1934, I joined the army in April 1934. The results came out after I joined the army & I passed 10th in 2nd division. I joined as a clerk in an army office. During the British time there was not much work. At 3 pm all offices would close. Wednesday & Saturday would be half days & Sunday was full day holiday. People would come back from office & go to sleep but I would study something or the other. I knew all the 18 adhyays & 700 shalokas of the Geeta by heart. I could recite Geeta the same way as I recited Jap ji Sahib. I was fortunate to have studied the Geeta from a highly learned scholar Bengali Baba. His views were different from the other scholars. I have read the translations of Chinmay Mission, Mahesh Yogi, Aurobindo, Geeta Press of Gorakhpur (founded by Jai Dayal Govind) etc but found the translation by this scholar the best. He translated the Yogasutra also but did not want to give his name to his translations of the Geeta & Yogasutra. Then I told him that people will start giving their name to your translation. He did not want to be associated with any particular sect. I suggested to him the name Bengali Baba since from the name nobody can make out his religion, caste or sect. His translation of Patanjali Yogasutra became famous all over the world like US, UK, France, Spain, Canada etc. Only learned people who are interested in mind psycology read such books. The Yogasutra that I read was translated by Major Basu from Sanskrit to English & was published in 1916. When Bengali Baba use to teach me he would keep telling me where the translations were wrong in this book & would correct it in the book. Slowly slowly he corrected the entire book. For example the word Samadhi cannot be translated in English. Major Basu had translated this word to English as Trance. Now Trance means behoshi while actually in Samadhi a person becomes superconcious & such a person’s mind is a spiritually absorbed mind. So then the correct translation was published in 1949 & after that many times. The publishing rights of the book were given to the publishers Moti Lal Banarasi Das, 40 Bangla Road near Delhi University. The publishers never published the Geeta translation of Bengali Baba because they being businessmen would have suffered since this book was contrary to all the other translations of the Geeta.

I retired from the army in 1966 after 32 years of service. I met Maharaj ji in 1968. Harbhajan Singh Yogi brought me to Maharaj ji. He was working as Income Tax officer & was stationed at Indira Gandhi Airport. He was a disciple of Maharaj ji then. I was at that time staying with a friend of mine in Delhi. He had formed an organization by the name of Khalsa Young Men Association & I was member of this association. He would give lecture every Sunday at the homes of different people. I also started giving lectures there. I travelled everywhere at my expense & would give lectures without charging any money. It so happened that 3 consecutive lectures took place at Harbhajan Singh’s house. He had told everyone that incase the Association did not find a volunteer they should have it in his place. Harbhajan Singh heard my views & told me to come with him to a saint he knew. I told him bluntly that I do not go to any saints. He convinced me to just meet this saint. At that time Maharaj ji was staying at 9 Teen Murti which was the house given to Nirlep Kaur since she was a Member of Parliament. We went to meet Maharaj ji. He would directly go to Maharaj ji’s room to meet him so he made me sit outside & he went in. Maharaj ji told him that he had not come alone & he should call me also inside. In those days I was in the habit of lecturing, I would never listen to anyone just kept on speaking. That day I spoke for 1 hour on Guru Gobind Singh ji. Maharaj ji kept listening to me. Maharaj ji was very fond of listening about Guru Gobind Singh ji. After I had spoken Maharaj ji told his sevadars to offer me tea. I told them I had tea & came but they insisted that Maharaj ji had said so I have to drink. So then I told them to give me some milk instead of tea. During those days Sukhwant Singh of Nising, Karnal did not even have a beard on his face. He was a disciple of Maharaj ji & use to be with Maharaj ji. He use to do kirtan very well. After a short while he called me again & told me to speak more on Guru Gobind Singh ji. I spoke for another 1 hour. So that day I spoke for 2 hours on Guru Gobind Singh ji & Maharaj ji listened to me very lovingly. Then I started coming to Maharaj ji regularly.

How Gobind Sadan Got It’s Name

One day Maharaj ji told me that we are establishing a new place & you have to come with us at 12 midnight since we have to go somewhere. I told Maharaj ji bluntly that I would go only in the morning. I was staying at Gokhale Market during those days. So Maharaj ji with his disciples went at night & I reached in the afternoon. When I reached they were discussing what name we should keep for this new place. Disciples were suggesting names like Sarawansar, Baba Srichand ji etc Maharaj ji kept listening to everyone then when he saw me coming he told everyone that the person who will keep the name of this place has arrived. Immediately on reaching I suggested the name Gobind Sadan. Go means God & Bind means protector and Sadan means home. Maharaj ji liked it instantly & this place was named Gobind Sadan. It also means The House of God & The House of Guru Gobind Singh. This is how Gobind Sadan got it’s name on 18th June 1968.

Maharaj ji would address everyone with a lot of respect. He would add “Saab” or “Sahib” after everyone’s name like Editor Saab etc. He started calling me Major Saab & that is how I came to be known as Major Saab. Gobind Sadan was established in 1968 & I stayed here for 1 year. In those days it was very difficult to stay here. There was no bus service. We had to go walking till Mehrauli or hitch a ride with someone. Once I got very sick because of dysentery & it became very difficult for me. Maharaj ji also did not come for 2-3 days. When Maharaj ji came I told him that I would like to go home. Maharaj ji told me to stay back but I was admant. I told Maharaj ji that I would come later. I went to Ludhiana & started staying there. I was getting pension from the government. I came back after 3-4 years. Maharaj ji then told me to stay back.