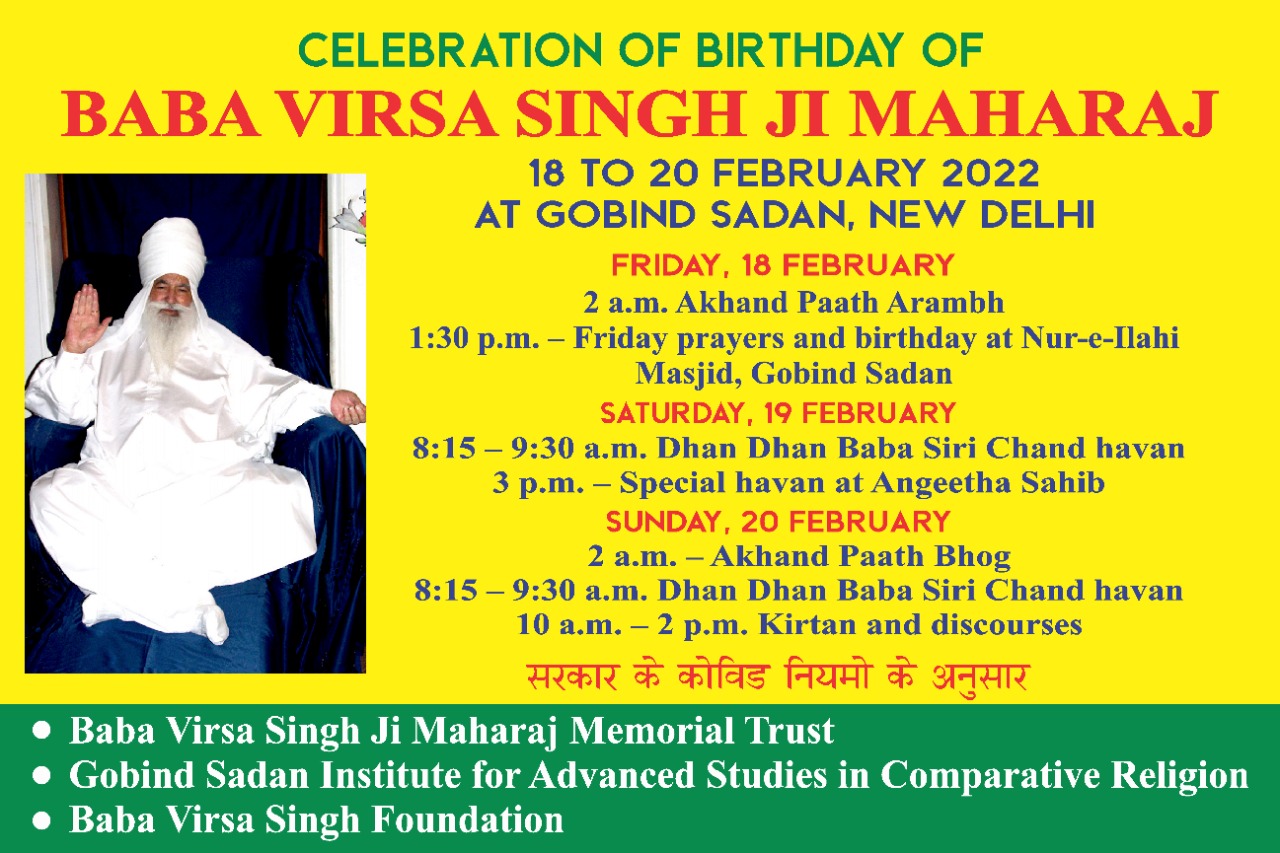 After two years of COVID restrictions by Delhi government, Gobind Sadan devotees are longing to get together again. But because of the continuing restriction on large religious gatherings, again this year Maharaj’s birthday had to be celebrated mostly by people who live in Gobind Sadan, without inviting people from outside. Nevertheless, Maharaj’s blessings are so strong that all who participated felt great love and joy.

The mela started on 18 February at 2 a.m. with the beginning of Akhand Paath in Maharaj’s honour. Then in the middle of the day, a magical celebration of Maharaj’s birthday was held for the first time in the beautiful mosque he built in Gobind Sadan. Following Friday prayers, many who had come to do their Namaz stayed on and were joined by many residents of Gobind Sadan for a very heart-warming programme. It was opened by Dr. Syed M. Hussein, a senior kidney specialist who passionately spoke about his first meeting with Maharaj in Sir Ganga Ram Hospital, where Maharaj had come for treatment. He didn’t know anything about Maharaj, but when he saw him, he said, “I cannot describe the Noor (divine Light) I saw.” He became very close to Maharaj and continues to feel his presence and follow his teachings. “Whether you are in mosque or mandir, church or gurdwara, the Love is the same. Love is our religion. Maharaj’s fragrance is everywhere.” He recounted several very touching experiences with Maharaj. When Dr. Hussein came to take Maharaj’s blessings for his Hajj to Mecca and Medina, Maharaj described many of the places he would see there. “These were places that no one would know about unless he had been there many times,” the doctor said. He asked Maharaj what he would like him to bring back from there, and instead of something costly, Maharaj asked for an inexpensive green triangular gumsha, traditionally worn around the shoulders for Namaz. The doctor spoke very appreciatively about the inclusiveness and equality of Maharaj’s mission. “Here whether mali or doctor or engineer, American or Indian, all are equal. My faith is that Maharaj’s message of love and equality will spread throughout the world.”

Gobind Sadan’s imam Jabbar Ali, host of the programme, commented, “We understand that Baba Virsa Singh is here in our midst, hearing and watching everything. May people come from all corners.” He appreciatively introduced Hardip Singh, explaining that in addition to being a member of the Baba Virsa Singh Ji Maharaj Memorial Trust, he prays every hour around the clock at the havan. Hardip Singh happily congratulated the multi-faith congregation on Maharaj’s birthday, saying, “Maharaj ji united all religions. He hasn’t left, and the dharma he started is still going on. That Light doesn’t come or go.”

Dr. Surjit Kaur Jolly told the congregation that the Mehrauli district in which Gobind Sadan is situated was the area of the great Muslim Sufi saints. She said, “Maharaj was a prophet and will always be. He taught us about spirituality and love. Even our drivers say that the very dust of this place is precious.”

Mary Fisher said, “I was so longing to hear the sound of the Azan (call to prayer) at Gobind Sadan, and now since Maharaj built this beautiful mosque, my happiness is complete.”

Dhanesh Khan said, “I was here, very young, when this mosque was built, and I have been doing Namaz here ever since. There are no words to express how wonderful this place is. Maharaj made this mosque and taught us how to love.”

Simranjeet Singh, a young man who does seva in Gobind Sadan, sang a beautiful song he had written in Sufi style about his love for Maharaj ji. In a melodious voice full of love, he sang, “My beloved Lord is also Jesus, Mohammad, Noor-e-Ilahi. They have all come together to bring happiness.”

Reverend Bhaskar, priest of St. John’s Church in Mehrauli, asserted, “We are all made by the same Creator. I have been coming here for 15 years. All here are of different colours and different religions, but all are one. That One made us all humans. Maharaj came to teach us love. Love is God.  Congratulations on Maharaj ji’s birthday from the Church of India. May we all love each other as fellow humans.”

Imam Jabbar Ali concluded, “We want to give this message of Maharaj ji to everyone in the country. We are Indians first and only secondarily Muslim. This foundation of Gobind Sadan is so strong that even though many try to shake it, no one can. We have problems because we don’t follow the way of our elders. Our greatest need in our villages, our country, our world, is peace. I pray for this for all.”

On 19th February the sangat gathered at Angeetha Sahib for a loving special havan in Maharaj’s honour. During the day, the curtains inside Maharaj’s angeetha had been opened for several hours, revealing its pristine interior. At night the whole area was a fairyland of lights.

On Sunday, 20th February, bhog was held at 2 a.m. of the five Akhand Paaths in Maharaj ji’s honour. Later in the morning, Eknoor Kaur’s jatha sang, “The way of the saints is the ladder of dharma, found only by great good fortune. The sins of millions of incarnations are washed away by focusing your consciousness on the Lord’s feet.” And another Gurbani shabad: In the company of the true sangat, “Filth is washed away, millions of sins are dispelled, and the consciousness becomes immaculate and pure.”

On that beautiful spring-like day, Sat Nam Singh Aluwaria of Vasant Vihar’s jatha sang Vasant Rag, “The earth is in bloom, and the sky is in bloom. Each and every heart has blossomed forth, and the soul is illumined. My Sovereign Lord King blossoms forth in countless ways.” They also sang Guru Gobind Singh’s bani: “Thou art king of kings, sun of suns. Thou art God of gods and of greatest Eminence.”

Hardip Singh urged that Maharaj’s birthday should always be celebrated in many places. As he noted, this year big celebrations are being held not only in Gobind Sadan, Dehli but also in Sarawan Bodla (Punjab), Shiv Sadan (UP), Nissing (Haryana), and Shajahanpur (UP).

Dr. Surjit Kaur Jolly noted that Maharaj always emphasized quality, rather than quantity. She said, “This is such a valuable mission for the whole world.” Kabul Virk read his Punjabi poem praising Maharaj ji in a stirring voice.

Mary Fisher spoke of the value of Maharaj’s words, and showed two new books that have just been published: “For the Love of Children,” comprised of three significant talks by Maharaj ji about children, and “Words of Wisdom, vol. 2”—pithy statements from Maharaj ji’s private talks on the subjects of faith, worry, and happiness.

Bhagat Ji of Shiv Sadan told the sangat that Maharaj ji once had a vision of Guru Gobind Singh sitting in a beautiful house with two doors. Outside one door there was a great crowd. On the other side there were only a few people. When Maharaj asked what this meant, Guru Gobind Singh told him that the long line on one side was of people making worldly demands, and he was readily granting them all, to satisfy their demands.  “And what about those few people at the other door?” Maharaj asked. “They want only Me,” said Guru Gobind Singh.