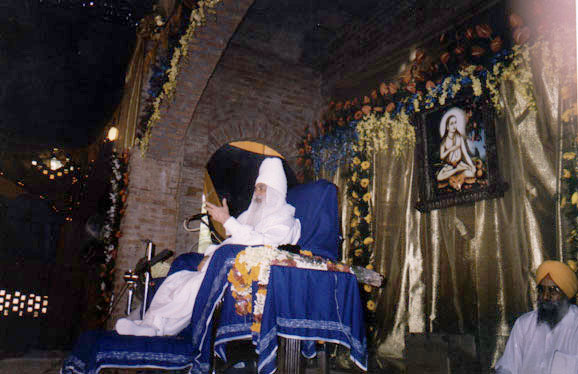 Baba Siri Chand is the elder of Guru Nanak’s two sons. Throughout the 149 years of his life, he was spreading his father’s nonsectarian teachings, and giving blessings and guidance to people of all religions and all social levels. At the time of the Emperor Shah Jahan, a survey conducted by the Emperor and preserved in the National Archives showed that Baba Siri Chand was the most universally revered saint in all spiritual communities.

Baba Siri Chand was visited by all the rulers of his time, including the Emperors Humayun and Jahangir, Yaquh Khan (Governor of Kashmir), Maharana Partap, and Kamran (Governor of Afghanistan). To one and all, rich or poor, Babaji gave the same message: meditate and remember God, pursue higher enlightenment, speak truth, love others, bring peace in society, and work for social welfare and justice.

Before starting his speech, Murli Manohar Joshi paid his obeisance to Baba Virsa Singh and congratulated him on the holy occasion on behalf of the Indian government. He said, “This is the right place where the birthday of such a great being should be celebrated. I am amazed to see people from all communities intermingling here, forgeting that the barrier of religion even exists.”

Baba Virsa Singh, in speaking of the importance of Baba Siri Chand, explained, “Guru Nanak gave Baba Siri Chand a great seat—that of being head of the Udasis (ascetics) and of meditating twenty-four hours a day. Guru Nanak knew that some day prices would be placed on the heads of the Sikhs and that the community would face a period of great struggles.” During the period of great oppression of Sikhs, it was the Udasis who carried on the teachings and maintained the holy places. Furthermore, two of the Sikh Gurus sent their sons to Baba Siri Chand as disciples. In 1655, Guru Arjun Dev waited patiently for weeks to meet Baba Siri Chand, who was deeply absorbed in samadhi. When he emerged, Babaji gave the Guru water from his own baoli for the tank the Guru was constructing at Tarn Taran for removing the people’s afflictions and worries, and from that time, the tank has never run dry. Similarly, Guru Ram Das Ji, the Fourth Guru, had waited for days to see revered Baba Siri Chand when he was deep in samadhi. He wiped Baba Siri Chand’s feet with his beard and welcomed him with great honours when he visited Amritsar.

“But the most important point,” said Baba Virsa Singh Ji, “is that Baba Siri Chand took birth in the house of Guru Nanak. This is a matter of great blessing. In the Guru Granth Sahib it is written that whoever has even seen or heard Guru Nanak will not come in the womb again.”

In his address, Baba Virsa Singh emphasized the contributions of those sons of Gurus who were sent to Baba Siri Chand as disciples. One such disciple was Baba Mohan Ji, son of the Third Guru, Amar Das Ji. One of the significant aspects of his history, as brought out by the speakers at Gobind Sadan, was that he was entrusted with handwritten tracts that were later compiled to make the holy scripture of Sikhs, the Guru Granth Sahib. The Fifth Sikh Guru, Guru Arjun Dev, personally went to Goindwal to collect the tracts from Baba Mohan Ji. They were carried in a palanquin from Goindwal to Harimandir Sahib in Amritsar in an extremely respectful manner that is still followed daily in Harimandir Sahib when the Guru Granth Sahib is carried.

Baba Virsa Singh observed, “It is a great thing for a Guru to offer his son as a disciple. A son is offered only to a place where the personage is very high, and where there is great love.” Another Sikh Guru who offered his son to Baba Siri Chand was the Sixth Sikh Guru, Guru Hargobind Sahib. Baba Siri Chand instructed that son, Baba Gurditta, to create four Dhuans (groups of Udasis), headed by his disciples. Baba Siri Chand blessed Baba Gurditta by saying, “Baba Gurditta is giver of spiritual and worldly success. He will always be in high spirits and have great respect.”

Describing the universal teachings of Baba Siri Chand, Baba Virsa Singh said, “The importance of celebrating the birthday of Baba Siri Chand is that the same qualities should develop in our minds—qualities of peace, of justice, of seeing God in each human being. When will we all unite? When, as he used to tell us, we will meditate. Then we will see God in everyone. Then these conflicts in our homes, societies, and our countries regarding boundaries between people will all disappear.”