This week we celebrate the birthday of one of India’s greatest but also one of its least known heroes, Baba Siri Chand ji – the Great Mystic Saint and eldest son of Guru Nanak Devji. In a well documented period, his life spanned the 149 years from 1494 to 1643. At the time of Jehangir, an official court census showed that Baba Siri Chand ji was the most revered Saint in all of India. While the Guru’s gaddi was passed to Guru Angad Devji and his 8 successors, Baba Siri Chand ji accepted the responsibility from his father of uniting all aspects of Indian spiritual society. He was revered by Muslims and Hindus, ascetics and householders alike. He was held in such esteem by the ensuing 5 Sikh Gurus that 2 of them offered their eldest son’s in spiritual service. Most notably Guru Hargobind Sahib offered Baba Gurditta who is regarded as the Patriarch of the Udasi Semperdai. Peace followed him wherever he went and through miracles and teachings he cooled the fires of religious conflict so present in the world of his time. 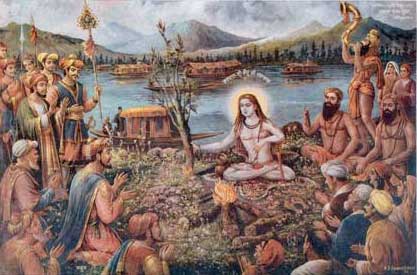 One beautiful story illustrates this point. As Baba Siri Chand ji was sitting near Srinagar Kashmir with his sacred fire burning before him, the local Nawab came to him filled with great anger. Out of anger he was creating conflict between the Hindus and Muslims of the area. Babaji took a burning stick from the fire and st

uck it in the ground. Immediately the flames vanished and in their place the stick sprouted leaves of a beautiful Chinar tree. Seeing this miracle the Nawab’s anger was cooled. Baba Siri Chand ji showed that God’s tree was broad enough to give shade to all people, Hindus and Muslims alike. What is so amazing is that this Chinar tree still stands today in Srinagar. It is called Siri Chand Chinar. Each year the Mahant from that Mandir takes a stick from the tree and leads the annual Amar Nath Yatra.

But Could this happen today?

It’s one thing to tell stories of the great saints and prophets of the past. But given the state of the world and the conduct of our religious management today many wonder how this could ever be possible. One may well ask why bother telling these stories if Baba Siri Chand’s example can not be applied to solve today’s most intractable problems.

His Holiness Baba Virsa Singh some 50 years ago started out to answer that very question. And today in his intentional spiritual community, Gobind Sadan (God’s House without Walls) on the outskirts of Delhi visitors are amazed to see what others could only imagine possible – a community in which people from all backgrounds live, work and pray side by side, are taught to revere all prophets and scriptures as their own – in which all holidays are celebrated and work continues to overcome poverty. What others may consider miracles are everyday occurrences. You are as likely to meet a senior political or religious leader from any country of the world as you are a village farmer coming to seek Babaji’s healing and blessings. While Guru Granth Sahib is recited 24 hours a day, at the havan which has burned continuously since its establishment in 1968, prayers are said around the clock. Babaji has deputed a Sikh devotee to pray for people at the havan – whatever problems they have are solved. In a pristine garden on the hill stands a lifesize image of Jesus with his arms outstretched. Everyday 125 candles are lit and the Lord’s prayer offered in whatever language people are present but often there won’t be a single Christian present. There an American woman blessed by Babaji offers prayers for people before Jesus and their troubles melt away. Behind Gobind Sadan’s mosque, Mandirs to Lord Krishna, Hanuman ji, Lord Shivji and Durga Mata dot the hillside.

So Baba Virsa Singh through his simple example has proven that by practicing the teachings of Baba Siri Chand ji and all the Gurus and Saints that through meditation we can learn to overcome our anger and hatred, through hard work we can alleviate poverty, and through sharing with those in need we can achieve justice in the world, We can cool the fires of our burning world and bring peace today.