“Peace will come wherever Baba Siri Chand ji is remembered.”

Thousands gathered in Gobind Sadan on a rain-soaked weekend and danced, sang, and prayed to honor their beloved Baba Siri Chand ji, the great mystic saint and elder son of Guru Nanak Devji. Baba Virsa Singh ji who has been known in the past to negotiate with the rain to come after a celebration told the throngs, “Don’t any of you think of asking God to stop the rain. He is pouring blessings on everyone. The whole cosmos is celebrating this great day.” 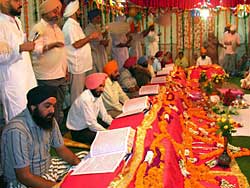 8 Akhand Paths concluded exactly at 2 a.m. in the morning, while at the havan Jaap Sahib echoed throughout the area. Tons of flowers of all varieties and colors turned Gobind Sadan into a beautiful living work of art, and lights illuminated every surface, in a continuous tribute to the one who Baba Virsa Singh ji reveres as his Guru. Baba ji encouraged everyone to take Baba Siri Chand ji’s blessings: “I am one of you. As a youth I grazed buffalo, I plowed the fields, and danced and played just like you. But I meditated on Baba Siri Chand ji and now I have a surplus in both accounts. He has made me a master over great worldly wealth – and has given me untold spiritual wealth as well.”

Baba Virsa Singh had harsh words for those who have continued to perpetuate untruths about Baba Siri Chand ji: “I have no time for those who stand in Gurdwaras and repeat that Baba Siri Chand ji didn’t follow the hukam. If he didn’t follow the hukam why would all the Gurus, who were the form of Guru Nanak, go to him with such love and even offer their sons to serve him? Now is a good time to beg forgiveness for this curse which has come upon us for showing him such disrespect.” 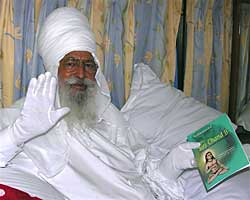 In honor of the occasion, Baba Virsa Singh ji presented a picture book, The Miraculous Life of Baba Siri Chand ji, (Sterling Publishers) edited by Ralph Singh, suitable for children and adults, which simply chronicles Baba Siri Chand ji’s key contributions to bringing peace during his 149 year long life from 1494 to1643. At the time of the Emporors Jahangir and Shah Jahan, Baba Siri Chand ji had the greatest following of all the saints in India. He spread his father Guru Nanak’s message throughout the subcontinent from Sindh to Srinagar, and from Kandahar to Kabul. Baba Virsa Singh ji plans to have the books distributed freely in schools and other institutions.

Babaji went on to say that,“Even if you don’t go to religious places of worship, practice the teachings in your daily life. Follow Baba Siri Chand ji’s example and the virtues and spiritual power will come to you.”

And the crowds sang and danced well into the night.