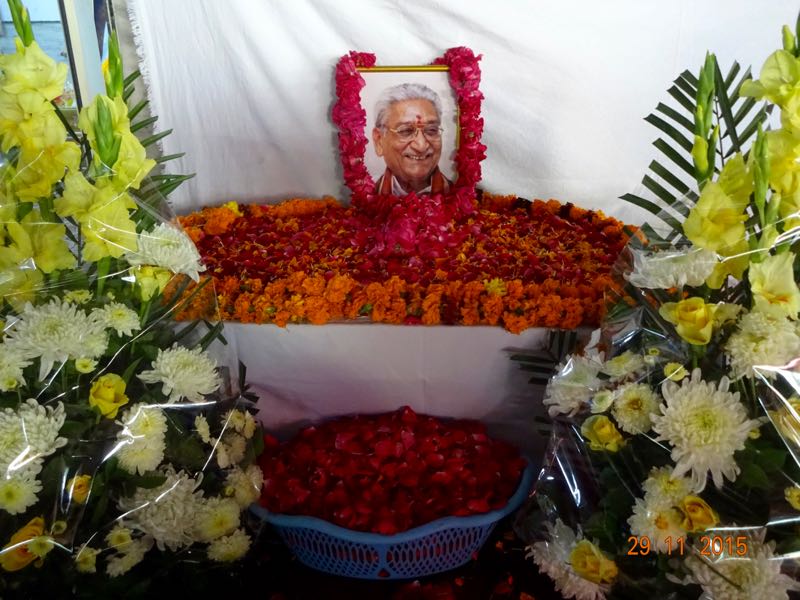 The last prayer ceremony (Antim Ardas) for Shri Ashok Singhal, late patron of Baba Virsa Singh Ji Maharaj Memorial Trust and International Patron of Vishwa Hindu Parishad was held at Gobind Sadan on 29 November 2015, after the conclusion of his Akhand Paath. Many people gathered to pay him tribute and to listen to the touching kirtan and speeches.

Dr. Surjit Kaur Jolly, Secretary of Gobind Sadan Institute for Advanced Studies in Comparative Religion and Principal (Retired) of SPM College of Delhi University, recalled the intimate relationship between Shri Ashok Singhal and Baba Virsa Singh Ji. She noted that Shri Ashok Singhal had been an engineer in metallurgy but became “an engineer in changing society.” Describing him as a “lion,” she said, “He totally engrossed himself in the resettlement of people during the Partition, and then he became a part of Gobind Sadan, where all deities can be experienced as living entities. As yet, people are not really aware of all that goes on at Gobind Sadan, but Ashok Ji was aware. He was very close to Maharaj Ji, so he is close to all of us.”

Gobind Sadan’s imam Jabar Ali said he had come to pay tribute to Ashok Singhal in Gobind Sadan, “where the path to heaven starts.” He explained, “People said that he was fanatic, but I can say that anyone who comes to Gobind Sadan cannot be fanatical. Now let us all reach out with love to each other, because if we do so, God is happy.”

Mary Pat Fisher, author of Living Religions, recalled that when she interviewed Ashok Singhal, he confirmed that Hindu Vishwa Parishad now has a double agenda: to help Hindus draw closer to their spiritual roots and also to help them appreciate all other religions. She quoted him as saying, “This is what Maharaj Ji taught us.”

Sardar Gurcharan Singh Gill, President of Rashtriya Sikh Sangat, said, “I have been involved with Maharaj Ji since childhood, but it was in 2003 that Shri Ashok Singhal brought me here. The effort was to reach out to all the saints and bhagats related to the Guru Granth Sahib. He said, ‘Let us go to Gobind Sadan, as it is living proof of what the Guru Granth Sahib says.’”

Shri Balkrishan Naik, Joint General Secretary of Vishwa Hindu Parishad, said, “Ashok Ji believed that no work was impossible if we move forward with faith in God. He met all big and small people. The universal brotherhood of Sikhism, accepting all as one, drew him to it, and the fact that so many different communities’ saints are included in Guru Granth Sahib with authentic devotion also impressed him. May the preaching of Guru Granth Sahib spread.”

Dr. Rai Singh, President of Baba Virsa Singh Ji Maharaj Memorial Trust, reported, “In our recent seminar, Shri Ashok Singhal Ji said that when his organization has any meeting, they first pray to all the various deities, saints, etc. This was an eye-opener because people would say that VHP is fanatic. In Gobind Sadan we give respect to all religions. His association with Gobind Sadan no doubt made him great in this world and in the other.”

Gurdev Singh, who was conducting the programme, concluded by reading his original poem in honour of Ashok Singhal. The touching verses in Punjabi ended with this couplet: “To the end of the world, the garden will be fragrant with the fragrance of that rose./ He will again become the spring of some autumn.”

After the tributes, a collage of photos of Shri Ashok Singhal with Baba Virsa Singh was presented to Balkrishan Naik to be placed in the VHP office.