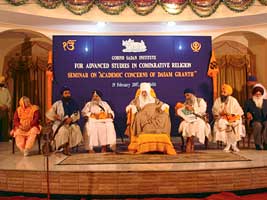 As part of the 8 day birthday celebration of its founder Baba Virsa Singh, on 19th February the Gobind Sadan Institute for Advanced Studies in Comparative Religion held a major seminar entitled “Academic Concerns of Siri Dasam Granth”, organized by Gurdev Singh, in which academics and panthic leaders and luminaries gathered to join Babaji in defending the authenticity of Guru Gobind Singh ji’s bani.

Gobind Sadan’s leader Baba Virsa Singh ji who for more than a decade has been defending the authenticity of the Guru Gobind Singh ji’s Dasam Granth against those who for their personal or political reasons have criticized it and denied it due respect, stated decisively “Dasam Granth is the cornerstone of Khalsa Maryada. It contains Jaap Sahib, Chaupai Sahib, and Sawaiyai, the bani of Nitnem and of Amrit, and it also contains Ardas.” Babaji while upbraiding the communal groups and fundamentalists who have brought conflict, foretold a bright future for humanity.

During his discourse to the gathering Babaji stated, “the Jethedars of all five takhats have accepted that Dasam Granth is to be respected as Guru Gobind Singh ji’s authentic bani and today the power of Jaap Sahib has been accepted in Russia.”

“Gobind Sadan has always taken strong action against those who breaks the rules of Sikh Maryada. We have and will continue to take all steps possible to inform and educate the sangat,” Babaji added.

It is necessary that all scholars, leaders, preachers and saints who love Sikhism continue to conferences and seminars on Sri Dasam Granth to inform and guarantee that the sangat not be misled by those critics’ false preaching and fall into their traps.

Babaji said that in order to preserve our heritage it was important that we celebrate the Guru’s birthdays according to our traditional calendars and not be swayed by what may seem modern. “The original dates are the actual days that these Blessed Souls entered the world. These are the days God’s light showers down on us, so how can we receive this light on another day? That is why there has been no clear agreement on the Nanakshahi Calendar.”

Giani Iqbal Singh, Jethedar, Siri Harimandir Takhat Patna Sahib spoke sharply in his opening comments: “Before we speak we must study Dasam Granth deeply. It takes years of research to grasp its meaning. But we have seen that anyone who can read or write Punjabi has decided that they are experts and they write whatever ideas come to their minds. Sikh scholars must respond and stop this trend immediately.

Keynote speaker, Dr. Harpal Singh Pannu, Professor and head of the Department of Religious Studies, Punjabi University, Patiala, recounted the 300 year history of Dasam Granth: It was given so much respect that, “originally Dal Khalsa were responsible for caring for this Granth, and then the leaders of the Nihangs took the responsibility. At this point all Nihangs, both the Damdani Takhsals, the Udasi and Nirmala Semperdais, the SGPC and DGPC, Srimani Akali Dal, and the Gobind Sadan Institute have all accepted that Dasam Granth is Guru Gobind Singh ji’s bani. Only some irresponsible missionaries and their organizations and missionary colleges have been preaching against the purity and authenticity of this Granth. If we don’t take strict action against them today then we will lose the opportunity.”

Dr. Mohinder Kaur Gill, eminent scholar and former Principal Mata Sundari College, Delhi spoke on Charitra Pakhyan sharing that people intentionally use the name Triya charitra to mislead the public. The Guru spoke of the need to recognize the disastrous results of both men’s and women’s bad character to save people from being drawn into such bad conduct. These issues are very relevant to today’s society. Anoop Kaur, Aurangzeb’s sister Roshanara, Shivaji’s son Sambha ji Sikander, Radha te Krishan should be role models for us. The first and last chapter is dedicated to Mata Rani. These figures lead us in the right direction. This bani, properly understood, defends a woman’s honor and will stop the killing of women and solve today’s problem. It provides a solution to the lack of morality in the world today.

Prof Anurag Singh, known for both his own excellent scholarship as well as preserving the work of his great father, Professor Trilochan Singh, showed authoritatively that the entire Dasam Granth is Guru Gobind Singh ji’s bani by citing the works of Guru’s special disciples. “Sainipati’s “Prem Sumarg Granth”, 1701, “Guru Sobha Granth,” in 1711, Bhai Mani Singh ji’s “Sikhan di Bhagat Mala,” 1734, and Mata Sundari’s own letters all prove its authenticity. All those who were near Guru ji clearly accepted this as their Granth.”

Dr. Surjit Kaur Jolly, Principal SPM College, Delhi University, spoke on Krishan Avtar emphasizing that Guru Gobind Singh ji praised Krishan Maharaj ji’s qualities as a great warrior and his kindness towards the people, showing that he was so much more than just the simple romantic as the world often portrays him. Through Krishan Avtar, Guru Gobind Singh ji teaches the kings the qualities of good rulership and instructs us in the qualities necessary to be a good human beings in the world today.

Prof Gurbachan Singh, Chairman of Gobind Sadan, USA and former Editor, Akali Patrika, told those assembled: “In order to understand Charitra Pakian, we need to understand what character really means. It’s a sad thing that the Granth of Guru Gobind Singh ji in which he has written “Charitra” to serve as a model of character is being represented as “chalitra”—bad conduct. This is an injustice. All the scholars must demand that this mischief be stopped immediately and action be taken against those who are responsible. We must ask scholars to translate and explain the meaning to clear away the publics’ doubts.