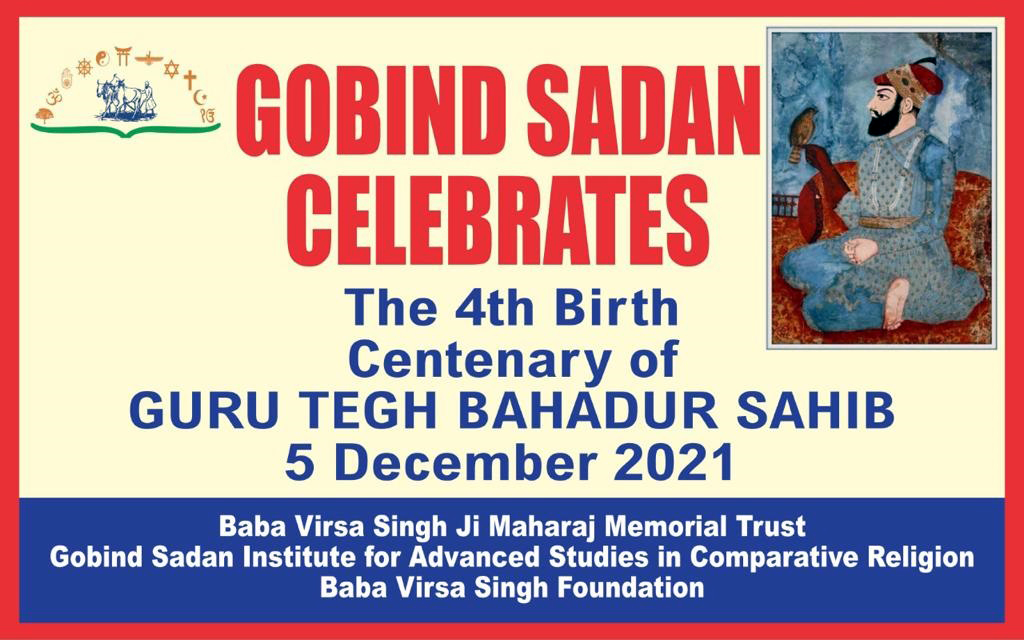 Since the 400th birthday in April 2021 of Guru Tegh Bahadur, celebrations have been going on all year to honour this extraordinary Guru. Gobind Sadan held its celebration on 5th December 2021.

Eknoor Kaur, Gobind Sadan’s hazoori kirtani, sang two shabads for the occasion. The second was Guru Tegh Bahadur’s hymn, “That person who in the midst of pain, does not feel pain, /Who is not affected by pleasure, affection or fear, and who looks alike upon gold and dust,/ Who remains unaffected by joy and sorrow, honor and dishonor,/ Who renounces all hopes and desires and remains desireless in the world,/ Who is not touched by sexual desire or anger, within his heart, God dwells./ That person, blessed by Guru’s Grace, understands this way.”

Hardip Singh welcomed the sangat, including many of Gobind Sadan’s young children who were especially invited so they could learn more about the great Ninth Guru. He told them, “Guru Tegh Bahadur is always present. May Maharaj ji’s mission spread to the whole world. Everything is happening by Maharaj’s grace.”

Sukhbir Singh Kalra, President of Baba Virsa Singh Foundation and member of Delhi Sikh Gurdwara Management Committee, said, “I will request the management of Gobind Sadan to celebrate Guru Tegh Bahadur’s birthday every year, so that maximum sangat can learn about the life of the Sikh Guru who gave his life for the sake of the Kashmiri pandits.”

Dr. Sukhbir Kaur Jolly, distinguished historian and Secretary of Gobind Sadan Institute for Advanced Studies in Comparative Religion, has just completed a definitive book about the life of Guru Tegh Bahadur. It will be published soon in Hindi as Guru Tegh Bahadur, Hind ka Chaddar. Holding the rapt attention of the children and sangat, she related many little-known incidents of his life, starting from his birth when his father, Guru Hargobind, came to bow in front of him and said he would become the saviour of dharma in our country. She pointed out that while most people think of him as sitting in samadhi, as he is usually depicted, he spent much of his life doing hard practical seva, such as washing the pots and dishes in langar. He was also a skilful horseman and hunted with bow and arrow. She related the fascinating story of how he was discovered after the death of the Eighth Guru by Baba Makhan Shah Lubana, who recognized him as the person who had called out to him in desperate prayer as his ship was sinking in a storm. As the new Guru, he was the master architect of Anandpur Sahib, a beautiful planned city. Next to Dr. Jolly on the stage banner was an authentic painting of Guru Tegh Bahadur. When visiting Dhaka, he had it painted by Ahsan, the royal painter of Shaista Khan, Governor of Bengal, when a devotee longed for his darshan to continue after he left for his further travels to many parts of India. Guru Tegh Bahadur took the brush and painted the face with his own hand. This is the only self portrait of any prophet.

Simranjeet Singh, 17-year-old son of Lakhwinder Singh, who takes care of the horses at Gobind Sadan, told about the Guru’s sacrifice of his life for the sake of freedom of religion of Kashmiri Pandits. He then sang a very touching song about the martyrdom of Guru Tegh Bahadur: “ O dear friend, you can apply the saw and cut my neck./ Let me go to decorate Chandni Chonk,/ My head will be a sacrifice at the Guru’s feet.”

Mary Pat Fisher concluded the program by telling how she or Hardip Singh pray to the martyrs daily at a special altar near Maharaj ji’s house. There used to be a low stone table there that Maharaj explained as the place of worship by ancient rishis. Since people unknowingly sat on it as a bench, Maharaj ordered that the sacred altar be covered with marble and made higher so that no one would sit on it. Mary said that when she prays there, she especially asks the martyrs Baba Deep Singh, Guru Arjun Dev JI, Guru Tegh Bahadur, and the four martyred sons of Guru Gobind Singh to help keep Gobind Sadan’s programme a pure expression of Guru Nanak’s great mission. She asks the martyrs to help us keep it alive so that it can be preserved in pure form and help the whole world.