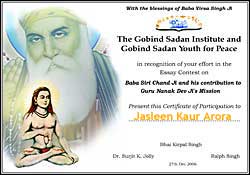 Maharaj Baba Siri Chand Ji was a great Udasi saint. Eldest son as well as the disciple of Guru Nanak Dev Ji, Baba Siri Chand Ji was highly respected by kings, saints, yogis, Sikh Gurus and the common people of all sects and religions. Babaji devoted his long life (149) years to meditation, preaching Nam and to moral, spiritual and religious uplift of society, helping the poor, the downtrodden and those in need. As directed by his father and master Baba Siri Chand Ji played a unique role of setting the Sadhu Samaj on the right path.

Baba Ji was born on Badon Sudi 9 of Samat 1551 (1494 AD) in Sultanpur Lodhi Destrict Kapurthala, Punjab. There were several highly unusual circumstances surrounding his birth. Instead of crying he emerged laughing. The room was filled with light and fragrance. A thin layer of ashes covered his body and the small curly knots of his hair were shining brightly. His right ear lobe was extended in a ring of flesh, leaving no doubt that he was a born “yogi”.

To compiment his spiritual education, Guru Nanak Dev Ji sent Babaji in Sirinagar for two and a half years inthe famous schol of Pandit Purshotam Das Kaul. He was the best student and sprprised everybody with his intelligence maturity and perspicacity. For example, when his teacher was challenged to a debate by a well-known and proud Brahmin of Kashi Pandit Som Nath Tripathi. Baba ji stepped in place of his teacher and in 6 times demolished the arguments of Pandit Som Nath, who felt so nervous that he left in a huff.

Baba Siri Chand accepted the spiritual and temporal ethnicity of Sikhism. And, above all, not only he himself accepted the tenets of Sikhism, he along with his disciples, willingly proceeded towards the hill to flourish the universal message of the Sikh religion. In due course he became a Maha Gurmukh, a Maha Gursikh, a great protagonist of Sikhism. His missionary work has not only been blessed with appreciation by Guru Arjan Dev and Guru Hargobind Sahib, but also by almost all the Sikh scholars.

Baba Siri Chand continuously sat in Samadhi with the name of God. He did so much tapasaya that god’s gifts flowed through him. Gob’s blessings poured forth from his merciful gaze.

Baba Siri Chand wrote Aarta to welcome his father on his return from travels. Aarta – a hymn revealing that Guru Nanak is master of the whole cosmos.

Guru Nanak Dev ji left Baba Siri Chand ji in charge of Kartarpur during his later Udasis and following his final Udasi bestowed the dress and duty of Udasi (Pilgrim / Missionary) on Baba Siri Chand ji himself. Thus, Baba Siri Chand ji was given the responsibility of uniting the various Sadhu Samaj (ascetic schools) and integrating them with the “householders (devotees who led a worldly life). Throughout his life he helped householder and Sadhu alike. One could say that Babaji himself was a householder since he adopted and raised his nephew and arranged his marriage.

Baba Siri Chand ji’s love and reverence for his father Guru Nanak Dev ji cannot be stressed enough. And similarly Guru Nanak Dev ji’s love for his elder son is something to be admired by all families. History has played a cruel trick on this relationship often portraying Babaji as one passed over in the “appointment” as the Guru’s successor and therefore casting Babaji in conflict with the ensuing Gurus. Nothing could be further from the truth. And nowhere could a child’s love be more apparent than in his hymn of praise for Guru Nanak – Aarta- which he composed and had the whole Kartarpur Sangat sing to greet and welcome their great Guru home from his third Udasi.

Baba Siri Chand Ji was renowned during his time as a great mystic – a figure of tremendous spiritual power and wisdom. In his practical life, he combined intense meditation with hard work among the people, in contrast to the Indian tradition by which ascetics withdrew from society. While recent history has at best obscured Baba Siri Chand Ji in the shadow of his father and guru, Guru Nanak Dev ji and the subsequent Sikh Gurus, history itself speaks to his greatness. A survey conducted during the region of the emperor Jehangir found that Baba Siri Chand ji was the most influential saint in India as measured by his vast following. He was revered by people form all walks of life, including Sikh Gurus, many of whom even offered one of their sons to serve him. Baba Siri Chand Ji welcomed those from all religions, teaching that “God’s tree’ is large enough to give shelter to all.

While his own life was a continuous miracle, he never called attention to himself. Rather, he and his followers spread the mission of his father in a universalistic way, through meditation on God’s Holy Name, hard work and service to those in need. They kept the spiritual flame of truth alive during centuries of oppression.

The most convincing argument about Baba Siri Chand Ji’s greatness and love and respect that existed between him and the Gurus is a spiritual one. Anyone who has followed Baba Siri Chand Ji’s example has become an ideal Sikh of Guru Nanak, dividing time between meditation, work and service.

In 1643, when it was time for Baba Ji to leave the world he marched towards the jungle on a nearby hill, bid goodbye to those following him and in a twinkling of an eye, disappeared. Babji’s body was never found. As many great beings before him, he comes and goes as he wishes and appears regularly to those who love him.

We cannot see him with our external eyes; but he has not gone anywhere. He is proof what is written by Guru Ram Das –

Baba Siri Chand was beyond the thrall of birth and death.

Baba Siri Chand was Brahmgiani, one with the eternal light of God, on with that Eternal power of which all the scripture have spoken. Even though he lived in the world, he remained beyond the world. As Guru Arjan Dev Ji wrote –