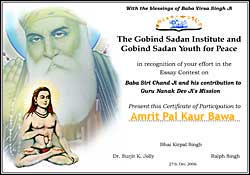 Babaji was born on Bhadon Sudi 9 of Samat 1551 (1494 AD) in Sultanpur Lodhi District Kapurthala, Punjab. His mother Sulakhni ji was a great lady who did all she could to help him achieve his goal. There were several highly unusual circumstances surrounding his birth. Instead of crying, he emerged laughing. The room was filled with light and fragrance. A thin layer of ashes covered his body and the small curly knots of his were shining brightly. His right ear lobe was extended in a ring of flesh, leaving no doubt that he was a born “yogi”.

As a child, he was of contemplative nature, and he became the first person to whom Guru Nanak prescribed the life of an Udasi. In contrast to ascetics who leave the world in order to meditate, an Udasi is a renunciate who lives in the world, maintaining everyday life as well as practicing meditation.

Baba Siri Chand Ji was renowned during his time as a great mystic – a figure of tremendous spiritual power and wisdom. In his practical life, he combined intense meditation with hard work among the people, in contrast to the Indian tradition by which ascetics withdrew from society. While recent history has at best obscured Baba Siri Chand Ji in the shadow of his father, Guru Nanak Dev Ji, and the subsequent Sikh Gurus, history speaks itself to his greatness. A survey conducted during the reign of the Emperor Jehangir found that Baba Siri Chand was the most influential saint as measured by his vast following. He was revered by people from all walks of life, including the Sikh Gurus, many of whom even offered one of their sons to serve him. Baba Siri Chand Ji welcomed those from all religions, teaching that “God’s tree” is large enough to give shelter to all. While his own life was a continuous miracle, he never called attention to himself. Rather, he and his followers, known as Usasis, spread the mission of his father in a nonsectarian, universalistic way, through meditation on God’s Holy Name, hard work, and service to those in need. They kept the spiritual flame of truth alive during centuries of oppression.

Even if we talk of his early life and education Guru Nanak Dev Ji started Baba Ji’s training at a very early age, mostly by personal example. Thus, as a child he formed habits of rising early, bathing and spending long hours in meditation. He was told religious stories and sermons to which he listened attentively. Baba Ji did not play like other children of his age; on the other hand he collected them and taught them meditation whenever they called upon him to play. There are several miracles associated with his childhood, for instance, once when people got anxious over the delay in his return from the jungle where he had gone, a search party was organised. It found, to it’s great surprise, Babaji in deep meditation surrounded by wild animals of all sorts such as elephants, tigers and leopards. All were sitting at his feet motionless, perfectly silent, with eyes closed, enamored by his mystical powers and in service of their master.

While education was in Sirinagar for two and a half years in the famous school of Pandit Purshotam Das Kaul. He was the best student and surprised everybody with his intelligence and maturity. For example, when his teacher was challenged by a well-known and proud Brahmin of Kashi Pandit Som Nath Tripathi, Babaji stepped in place of his teacher, and in no time demolished the arguments of Pandit Som Nath Tripathi, who felt so nervous that he left in a huff.

In 1558, when Babaji was seven, Guru Nanak Dev Ji left for his first Udasi (long preaching journey as a renunciate). Baba Ji was placed in the care of Bebe Nanaki, Guru Ji’s elder sister, “respected sister” said Guru Nanak Dev Ji, “This is no ordinary child. He will grow to be a great saint, with a large following. He will have a long life and lead a separate seat. He will not marry but his younger brother Baba Lakhmi Chand will have a family and provide a link with our future generation. Babaji visited Pakhoke and Talmandi also to meet his grandparents. Though he was a child, Babaji’s face was glowing with friendliness and his wide knowledge, sharp intelligence and spiritual achievements at such a tender age made him popular everywhere. The Nawabs at these places especially paid homage as they did to Guru Nanak. When Guru Ji returned from his first Udasi, he found his son, a lad of fifteen very firm in his principles and fully devoted to meditation. Guruji, during his brief stay at Sultanpur and before leaving for the second Udasi, gave maximum time to Babaji and blessed him with NAM as his first disciple. On his return from the second Udasi, Guruji advised him to study Vedas and other Shastras to continue his religious education, even though both sets of grandparents wanted him to enter business in accordance with the family tradition.

It is a source of great pride to any worldly father if his children follow his instructions. How happy Guru Nanak must have been with Baba Siri Chand as he fully adopted his father’s emphasis of meditation on the Name of God.

As Gurbani (the guru’s recorded teachings) says, “Nanak Ka Ghar Keval Nam”. In Nanak’s house their is only Nam. Baba Siri Chand Ji continuously sat in samadhi with the Name of God. He did so much tapasya (disciplined meditation) that a great bounty of God’s gifts flowed through him. People from all religions from all over India flocked to him and became his followers because an ocean of God’s blessings poured forth from his merciful gaze. They loved him and prayed to him not only of respect for his father but also because of what he became by imbibing and practices of his father’s teachings.

In the end, I would just recall his bond as such he looked of everyone with the same love, the same blessings. He taught them to overlook people’s caste, religion and personality and always recognized the omnipresent God in every person, as also in animals, in thus, in the earth. He never proclaimed any separate religion or separate principles. Rather he stressed Universal love on one God who pervades all of creation, whom we call by different names, worship in different ways, and meditate upon by different method.

Baba Siri Chand was beyond the thrall of birth & death. He proved Guru Nanak said “Gumukh avey jae nisang” the one whose life is turned towards god can come and go as he pleases. At the age of 149 when Baba Siri Chand was sitting giving a discourse, he got up and said, “I am leaving now”. Where did he go? Wherever he wanted. He walked away dressed just as he was.
It is said that when he came to a rushing river he steeped onto a rock and it carried him across like a boat.

Baba Siri Chand is here in us eternally, may he forgive us and bless us with his merciful gaze so that we may meditate and practice his teachings.